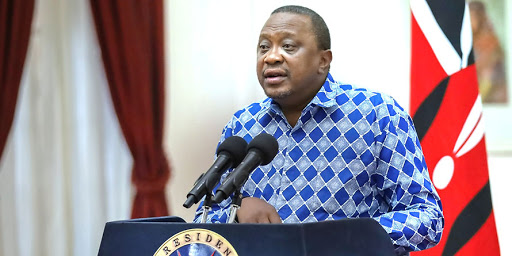 President Kenyatta distanced himself from the ongoing revenue allocation formulae that has hit a snag in a record 9 times in the senate. He made it clear that the commission for revenue allocation CRA, made its recommendations to the senate on how revenue should be shared.

‘’CRA made its proposals on how the revenue should be shared and it’s in the senate, equity and fairness should inform revenue sharing’’

‘’I don’t see why a resident of Nairobi should continue leaving in abject struggle still using paper toilets, just because he comes from Nairobi that is presumed to be rich’ ’he lamented.

“I am asking my fellow leaders to join me in delivering services to the people who elected us. Let us not start politicking and campaigning when our focus should be on bringing development”, he said.

He further advised that Leadership is God given, and should not divide people because God already knows about everyone’s leadership ways.

The head state was speaking at a function at the KICC, where he issued 38,000 title deeds to land owners in Embakasi Ranch, Tassia and Korogocho.

Kenyatta promised to deliver on his promise saying he is not interested in daily politics. He also promised to tour different parts of the country to give title deeds to end the absentee landlords raw.

“You will see what I am doing, my actions to you who gave us this job,we will be in all other parts ,kilifi, Tharaka Nithi and all over the country doing this job Those who are talking will continue to talk.”

He also advised those who received title deeds to use them well to their benefit and the benefit of their children and grandchildren.

This comes after the senate adjourned for a record 9 times without resolving the revenue sharing stalemate.

However, the senate has formed 11-man consensus committee to try and arrive at a solution.

Last sitting was characterized by ugly scenes that lead to adjournments as senate stood in solidarity with 3 of their colleagues who were arrested and driven to their home counties over different allegations.

The arrest was however connected to the voting patterns in a divided house, Interior CS Fred Matiang’I has since denied the allegations of state intimidation on the senators.