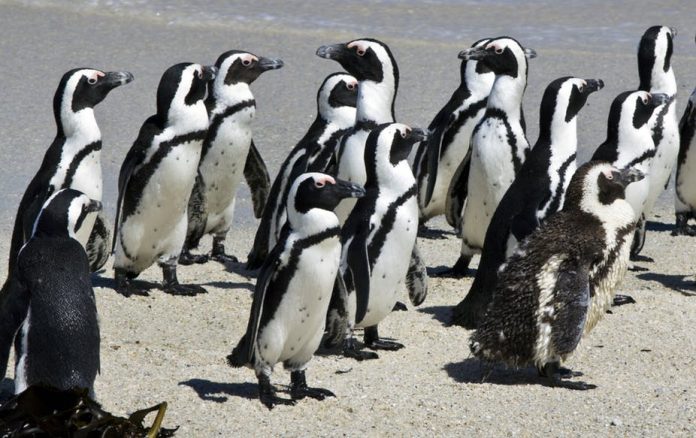 Seabirds are the world’s most threatened bird group. The latest State of the World’s Birds shows that there’s a high proportion of threatened species particularly penguins, albatrosses and petrels. One penguin species at risk of extinction is the African Penguin, which is classified as “Endangered” under the International Union for Conservation of Nature Red List.

Understanding how these seabirds respond to changes in the availability of food is important for preserving them and managing marine ecosystems. It’s vital information for conserving this iconic species.

African penguins are found along the Namibian coast and South Africa’s western seaboard, which means that they forage in the Benguela current. This current runs on the eastern boundary of the South Atlantic, starting as a northward flow off the Cape of Good Hope and skirting the western African coast towards the equator.

The Robben Island penguin colony in South Africa is about 10km north-west of Cape Town’s harbour. It’s currently one of the country’s largest African Penguin colonies.

From 2011 to 2013, an experimental fisheries closure zone with a 20km radius was maintained on the island. Commercial fishing could not take place within that area at that time. This provided a rare opportunity to study penguin fishing behaviour and the condition of their young in relation to local fish abundance, without potential interference from commercial fisheries.

Our study tracked the penguins’ movements, their diet and measured the physical condition of their chicks. By attaching GPS-temperature-depth devices to their back feathers with waterproof tape (much like a backpack), we gained insights into the foraging behaviour of breeding adults.

When some of the penguins have to work harder to find food this could be used as an early warning signal to allow conservation efforts to be initiated quickly. This is important because if the penguins struggle to find fish near the colony for extended periods it can have knock-on effects for the health and survival of their chicks.

When comparing years of low and high fish abundance there were differences in penguin foraging behaviour. We found that when food supply was low the penguins made a greater effort and spent more time hunting.

In 2011 there was lower prey availability. By tracking the penguins we were able to observe that they swam further, dived more for longer, and made more wiggles (prey pursuits) than in 2012. In 2011 some individuals worked much harder to find fish to feed their chicks.

During 2012, due to the abundance of fish around the island, the penguins spent 60% less time diving. We also found that chicks got bigger when there was more prey around.

Penguin diet sampling has taken place at Robben Island since 1989 with anchovy as the main prey item at 80%. Surprisingly, in 2011 there was an unusually low percentage of anchovy (40%) in breeding adults’ diets.

In 2011, the penguins changed their diet to eat a large percentage of Cape horse mackerel, which has a lower energy content than anchovy.

The foraging behaviour of the African penguins also indicated that they had to put more effort into finding food for their chicks. The fact that fish supplies influence penguin behaviour and the fitness of their offspring is something that’s often assumed in studies, but difficult to test.

Finding the balance between minimising costs to fisheries and maintaining sufficient fish resources for marine species will be challenging due to disruptions caused by climate change.

Recently, the Department of Environmental Affairs declared the island has a marine protected area. It’s one of several recently established to support marine biodiversity of the ecosystems in the region. This will contribute to the conservation of seabird species that are at risk.