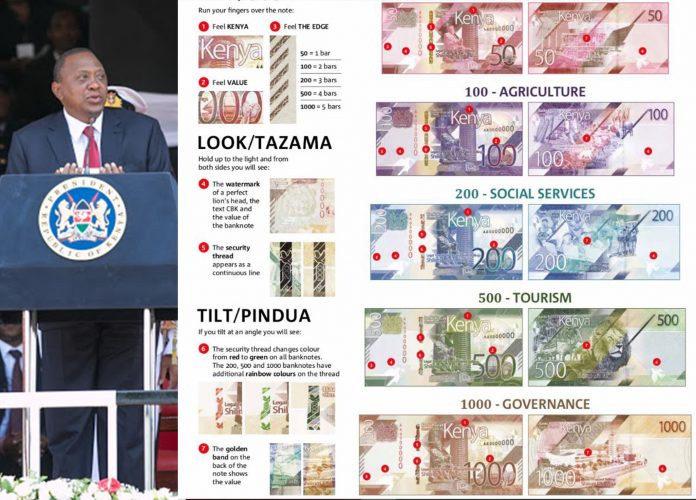 The year 2019 has been full of suprises, especially in our local world of finance. Kenyans were yesterday treated to the shock of the century.

Kenyan President Uhuuru Kenyatta announced the introducxtion of the new note currencies of the values, 1000, 500, 200, 100 and the 50 kenyan shillings. With the initial announcement recieving backlash from all ends, the Central Bank of Kenya went back to the drawingboard to come out with a better design for the new notes.

Kenyans then went ahead and rejoiced over the new announcement… but for a moment. Uhuru then went ahead to announce the phasing out of the most precious of the currencies.. the 1000 note otherwise known as brown/ndovu, in 1st October 2019

This announcement sent jitters down many kenyans weho would rather store their money in their homes, and other organizartions that dont trust the banks. “This is going to be a problem to the banks, because now everyone will be forced to use banks to handover 1000sh notes, therefore we might be getting long queues especially in remote banks” said one Leonard, a Bank agent.

Drawing similarities to a similar action by India Prime Minister, Narendra Modi, the currency withdrawal maybe a tool in fighting corruption in kenya. with the backdrop of the recent roll out of the much criticized Huduma Namba, it will now be hard for you to launder the money. Heres why

With the likes of Kabura who used to carry cash in sacks, will now be forced to make purchases, bank large sums of the money or choose to invest in ”air” inorder to disapear the notes in thin air. Or even worse, (God forbid) those church harambees may come in handy now.

But this might be a challenge. The 1000 note will be useless after 1 october 2019 therefore making it hard for property traders to accept cash.

Makueni Senator Mutula Kilonzo Jr also chipped in applauding the move by the government that was geared to fighting corruption. In a tweet, ”In Kenya, the money in vaults may not be surrendered entirely, but the owners will be left with stationery in October. Touché,” he conveyed.