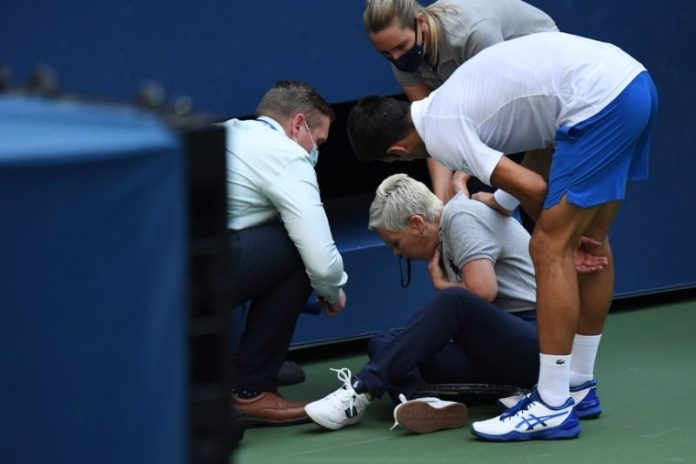 Novak Djokovic has apologised for hitting a line judge with a ball at the US Open, saying he is “extremely sorry for creating her such stress”. The world number one was disqualified from his fourth-round match against Spain’s Pablo Carreno Busta.
The Serb, 33, who had just had his serve broken, took a ball out of his pocket and hit it behind him, striking the woman in her throat.

“This whole situation has left me really sad and empty,” said Djokovic. “I checked on the lines-person and the tournament told me that thank God she is feeling OK. “I’m extremely sorry to have caused her such stress. So unintended. So wrong. I’m not disclosing her name to respect her privacy.”

After a lengthy discussion, Djokovic was defaulted by tournament officials at Flushing Meadows.
He will lose all ranking points earned at the US Open and will forfeit the prize money he had won at the tournament. He could also be fined for the incident.

“As for the disqualification, I need to go back within and work on my disappointment and turn this all into a lesson for my growth and evolution as a player and human being,” Djokovic added in a statement on Instagram.

“I apologise to the US Open tournament and everyone associated for my behavior. I’m very grateful to my team and family for being my rock support, and my fans for always being there with me. “Thank you and I’m so sorry.” His exit ended his hopes of winning an 18th Grand Slam title and narrowing the gap on Rafael Nadal (19) and Roger Federer (20) in the race to finish with the most men’s major wins.

What happened?
Djokovic showed his frustration after losing serve to trail 6-5 against Carreno Busta in the first set.
He also showed a flash of temper two games earlier at 5-4 – whacking a ball into an advertising board after the Spaniard saved three set points.

Leon Smith, Great Britain’s Davis Cup captain, said he was “surprised” Djokovic did not get a warning for that incident, and felt one might have prevented the controversy which followed. After Djokovic was defaulted, Smith told BBC Radio 5 Live Sports Extra: “There has to be consistency, if someone hits a ball with that much venom and temper, call a warning.
“The second one can be dangerous and so it proved to be.”

Djokovic pleaded his case with tournament referee Soeren Friemel and Grand Slam supervisor Andreas Egli during a long conversation at the net.

Eventually, however, he accepted his fate and shook hands with Carreno Busta, who looked shocked by what had happened as he waited in his chair for a decision. Friemel said that there was not “any chance of any opportunity of any other decision other than defaulting Novak because the facts were so clear, so obvious” and that there was “no discretion involved”.

“We all agreed that he didn’t do it on purpose but the facts are still that he hit the line umpire and that the line umpire was clearly hurt.” Djokovic left Flushing Meadows without doing his news conference.