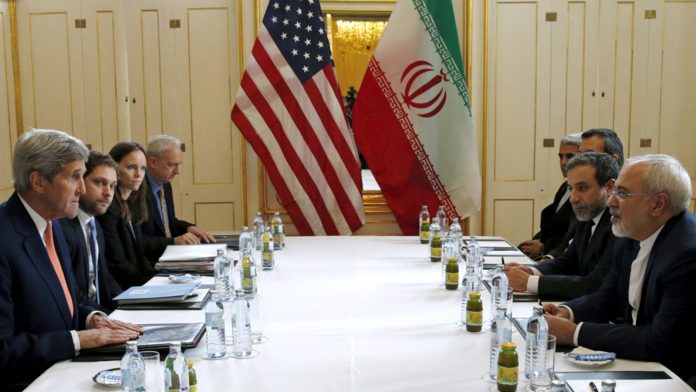 The US has imposed new sanctions on Iran, after other powers rejected its demand to reinstate UN measures that were lifted under a 2015 nuclear deal.

US President Donald Trump issued an executive order that opens up foreign governments and companies to economic penalties if they sell weapons to Iran.

Iran said they would have no effect.

What is the background to the move?

Under the nuclear deal, the P5+1 group of world powers – China, France, Russia, the UK, the US and Germany – gave Iran sanctions relief in return for limits on its nuclear programme. They sought to prevent Iran from developing a nuclear weapon – something it denies wanting to do.

The accord has been close to collapse since 2018, when President Trump abandoned it and reinstated US economic sanctions in an attempt to force Iran to negotiate a replacement; this would place indefinite curbs on its nuclear activities and also halt its development of ballistic missiles.

Iran has so far refused and has retaliated against the US sanctions by rolling back a number of key commitments, including those on the production of enriched uranium, which can be used to make reactor fuel, but also nuclear warheads.

Last month, the UN Security Council rejected a draft US resolution that would have extended indefinitely an arms embargo on Iran due to expire in mid-October.

In response, the Trump administration attempted to “snap back” (reimpose) the UN sanctions on Iran, accusing it of significant non-compliance with the nuclear deal.

But other Security Council members said the move was void because the US had quit the accord two years ago.

Despite that, the Trump administration insisted on Saturday that the UN sanctions on Iran had been restored and that the arms embargo would no longer expire.

What is the US trying to do?

President Trump declared on Monday that his new executive order was “critical to enforcing” the UN arms embargo.

“The order will greatly diminish the Iranian regime’s capacity to export arms to terrorists and dangerous actors throughout the region, as well as its ability to acquire weapons to build up its own forces,” he added.

The new sanctions will block the property, and interests in property, in the US of those who contribute to the supply, sale or transfer of conventional arms to or from Iran, as well as those who provide technical training, financial support and services, and other related assistance.

They include Iran’s ministry of defence; the Atomic Energy Organization of Iran; the Shahid Hemmat Industrial Group, which the president said facilitated Iran’s ballistic missile development; and Venezuelan President Nicolas Maduro, who has fostered closer ties between his country and Iran.

Iran’s envoy to the UN, Majid Takht-Ravanchi, tweeted: “The US decision today to impose sanctions on Iran has no practical effect; rather, it is a clear sign of desperation after its recent failures at [the] UN which only added to US’ isolation.”

READ  Why looming constitution change is fueled by power struggles