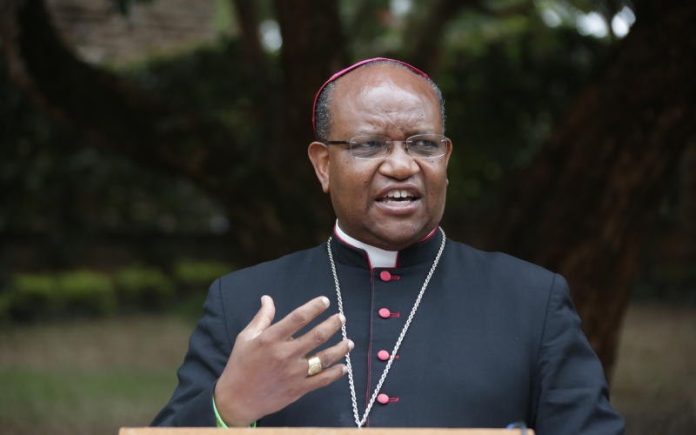 The Bishop told the media on Monday that making light of the situation was inappropriate and disrespectful.

Muheria cautioned leaders against trivializing serious issues such as GMOs.

“We feel that it was distasteful and disrespectful to Kenyans to joke about life and death and even if it is an issue to be taken as a joke it will be wrong to bring about statement whereby we trivialize death, suffering and insecurity,” he said.

Muheria claimed that the CS owed Kenyans an apology, especially given the country’s current drought in some areas.

“We feel irrespective of the matter in consideration, we would request honestly that Kenyans deserve respect and not spite and in this matter, they deserve an apology,” he said.

“Don’t take Kenyans for granted; let’s respect the people we lead and accord them their dignity,” he added.

Last week, CS Kuria publicly stated that the 10 million duty-free GMO maize he allowed to be imported can be added to the list of causes of death in Kenya since Kenya is a hotbed of death anyway.

“We have so many things that can kill us in the country. Being in this country, you are a candidate for death,” he said at a past address.

“And because so many things compete for death, there is nothing wrong with adding GMOs to that list. That is why we have deliberately allowed GMO until we are satisfied that we have enough maize, the staple food.”

He also voiced his opposition to the plans by President William Ruto’s administration to bring in genetically modified food.

“As a party, we believe the matter of GMO foods in our country is too serious to be reduced to a cruel and juvenile joke. We call upon Mr. Kuria and the UDA regime to apologize to the Kenyan people,” said Raila.

“Officials who lack scientific literacy on such serious matters must never use their office to demean the Kenyan people as though we are a helpless, enslaved lot.”