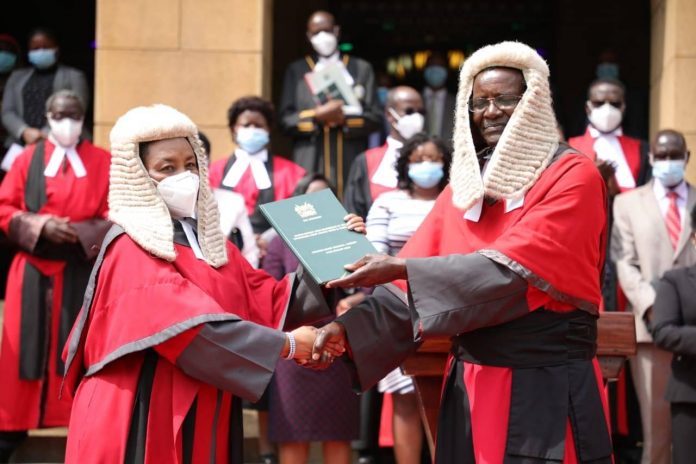 David Maraga has officially been decommissioned as Kenya’s Chief Justice in a colorful send-off at the Nairobi based Supreme Court. – By Gerald Gekara.

He held his very last session as chief justice, accompanied by Supreme court justices as well as a section of judges and legal officers who serve under the Judiciary.

In his last speech, Maraga said his appointment to the office of the CJ was a blessing from God, especially after he told those who vetted him that he could not sit on a Sabbath (Saturday).

“I stand here today full of gratitude and appreciation to the people of Kenya after serving for 18 years… During the interview, I was asked if I would sit on Saturday. I decided to live by my faith and not sit on Saturday. The rest is history. I can’t explain why God saw me worth to serve… he gave me the job due to his marvelous grace.”

Deputy Chief Justice Philomena Mwilu who will take over as the Chief Justice, praised Maraga for expressing courage in fighting for the independence of the Judiciary.

“We are gathered to celebrate his service to the nation. Yours has been a life of service characterized by hard work, honesty, integrity and fidelity to the rule of law… As Chief Justice your commitment accelerated transparency in the Judiciary, enhanced independence, you leave a proud legacy.” said Mwilu.

DCJ Mwilu will serve in an acting capacity pending the appointment of another chief justice by President Uhuru Kenyatta.

The appointee will be subject to parliament vetting before being installed by the Judiciary Service Commission.

Should she be elected to chair the Supreme Court, DCJ Mwilu will be the first female Chief Justice in the history of Kenya.