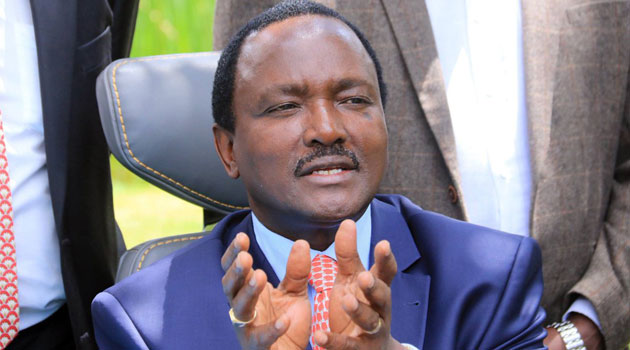 Wiper leader Kalonzo Musyoka has distanced himself from claims that he illegally acquired his Yatta farmland during his tenure as the Vice president. – By Gerald Gekara.

“Addressing a rally in Bomet on Friday, DP Ruto made a frivolous and unsubstantiated claim to the effect that I grabbed government land in Yatta. The wild claims hold no water. The allegations are a cheap and a desperate attempt at character assassination.” Kalonzo said.

Kalonzo dared the Directorate of Criminal Investigations to probe the allegations, claiming he is clean as wool.

“I today challenge the authorities to open an investigation into this matter. I am today presenting myself for a thorough investigation by the Directorate of Criminal Investigation as well as the Ethics and Anti-Corruption Commission. I want the matter settled once and for all.” He added.

The former Vice president further challenged the investigating authorities to instead focus their energies on DP Ruto’s various accusations of land grabbing.

“In the same vein, I challenge DP Ruto, alias “Arap Mashamba” well known for his unbridled greed for both public and private land, to offer himself for investigation concerning the following scandals that are in the public domain”

1. The grabbing of the land belonging to Hon. Joseph Murumbi, Kenya’s first Vice-President and a renowned conservationist.

2. The attempted land grab of the Langata Road Primary School playground, where innocent children were mercilessly teargassed and traumatized.

3. The grabbing of the piece of land on which Weston Hotel is located. It is in public knowledge that the land is public property belonging to the Kenya Airports Authority.

4. Who grabbed more than 100 acres belonging to the late Adrian Muteshi, an IDP who died out of bitterness and frustrations having fought for more than 10 years trying to reclaim his land, albeit successfully. The D.P was found criminally culpable.

5. DP Ruto should tell Kenyans the truth about who swindled Makindu Motors of millions of shillings, where a businessman lost Kshs.300 million due to shenanigans emanating from his office.

6. Can Arap Mashamba tell Kenyans how he acquired large tracts of land in Taita Taveta County?

7.What does DP Ruto know about the fake arms scandal, where one of his bodyguards Seargent Kipyegon Kenei was murdered?

Kalonzo called upon the deputy to shun divisive politics and character assassinations, as it is unprofessional and ‘wreaks havoc’.

“Let us preach unity and avoid divisive politics that can plunge the country into chaos. Let us remember that we are One Kenya. This is our home. And we do not have another country. People of DP Ruto’s ilk must not be given the chance to wreak havoc through wolfishly deceitful manipulations. They must be stopped in their tracks!” He concluded.