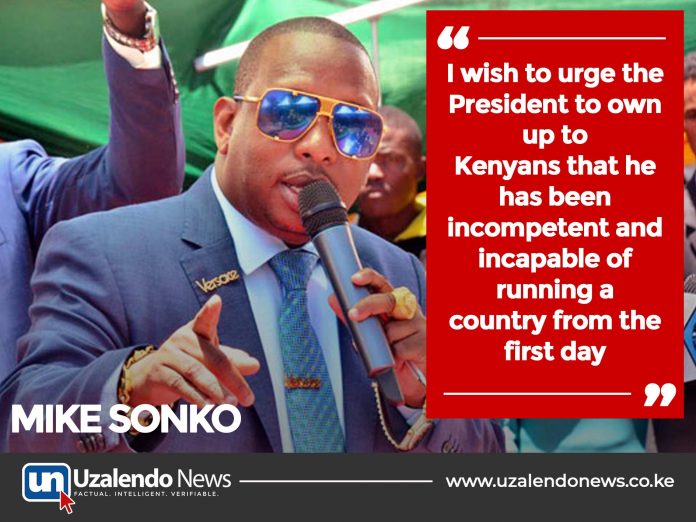 First of all, it is embarrassing the sitting President of the Republic of Kenya to resort to addressing a section of Kenyans in his mother tongue, excluding millions of other Kenyans from his purported “state of the nation address” at a time when our country is yearning for unity more than ever before. – Mike Sonko, Full statement.

This act alone is in gross violation of Article 131 (1) (e) of the Constitution of Kenya that demands that the President shall be a symbol of national unity.

Secondly, it is shameful for a sitting president to lie to a Section of Kenyans through his native language, in the hope that other communities will never understand what he said. For the record, it is NOT Uhuru Kenyatta who made me the Governor of Nairobi.

I was validly elected by close to one million residents of Nairobi, garnering more votes that the President himself, and Governors are NOT Presidential appointees.

When I assumed office in 2017, I inherited a badly run down city that held an endemic culture of stealing public resources at the expense of services delivery, a culture that was initiated by the President’s half-sister Margaret Kenyatta when she was the Mayor of Nairobi in 1970-1976.

It is from that time that public lands and utilities were stolen with wanton abandon, zoning laws and policies disregarded with impunity, and many other vices became the hallmark of the operations of City Hall.

Within a few days after assuming office, I cracked down on the cartels that had held Nairobi hostage for decades, sealed all the looting avenues by digitizing revenue collection, and Nairobians began to enjoy services once again without having to offer or pay a bribe.

It is the result of these stringent measures that International Agencies and Partners like the World Bank, UNEP, UNDP, DANIDA and many others regained confidence in Nairobi, and provided support that saw my administration build over 140km of roads in under two years, compared to less than 20km done by my predecessor in 5 years.

It is through these partnerships that my administration was able to construct three (3) new fire stations in Waithaka, Kangundo Road and Ruaraka in less than two years. Mark you, the last and only fire station in Nairobi on Tom Mboya Street was constructed in 1907!

All Nairobians and Kenyans at large know that the Pumwani Maternity Hospital was a dreaded death-trap by our expectant mothers. Within a year, I transformed the Hospital to a world-class facility that saw infant and maternal mortality rates decline, with more people seeking services from all our facilities.

For decades, our traders have had to endure deplorable facilities in the name of markets. In under two years, my administration was able to construct the Karandini, New Wakulima, Mwariro, Westlands and City Park ultra-modern markets with a combined capacity of hosting over 15,000 traders.

It goes without saying that I also inherited a City that was choking in stench from mounds of uncollected garbage from every corner of the City.

Within a few, this was a thing of the past, and garbage was consistently collected regularly across the City until the President took over that function through the Nairobi Metropolitan Cartel headed by Saddam Hussein.

Today, Nairobians from every estate are complaining of the return of garbage mounds that stay months on end without being collected.

The list is long, and I a extremely proud of my achievements in the first two years, before the cartels from Statehouse and the President’s family hatched a scheme to disrupt my administration by endless summonses by their puppet EACC, culminating in my dramatic arrest on December 6th, 2019 over frivolous allegations.

Even nursery school going children know that this was pure political witch-hunt aimed at distracting me, especially when my administration was performing better than the National Government in all aspects.

If you doubt that, you can get corroboration from reports by the EACC, the Controller of Budget, the Auditor General and other International Agencies between 2017 and 2019.

It is therefore ridiculous for the President to allude to failure of any administration, yet he has presided over the worst administration in the history of Kenya.

What the President will never tell Kenyans is that his selfish family agenda was the motivation behind my illegal and hurried removal from office.

The Kenyatta family has set out on an elaborate plan to misuse Nairobi County resources to build infrastructure for their Northlands City project, hence the illegal demolitions and evictions we saw in Ruai Kariobangi and Korogocho in the guise of expanding the Nairobi’s sewerage infrastructure.

The same President was however quick to mobilise resources and Senators to save Anne Waiguru after the Kirinyaga County Assembly had impeached her over corruption allegations.

Sing BBI or else..

Ms. Waiguru who had earlier ‘been given lighter duties’ by President Uhuru Kenyatta is safely in office and untouchable as long as she can sing BBI. Despite borrowing over 8 trillion shillings in the last 8 years, what does the President have to show apart from unprecedented unemployment, poverty and hopelessness in millions of Kenyans?

The millions of jobs promised to our youth remain a mirage with the head of state now resorting to selling false hope in the name of Handshake and BBI.

In conclusion, I wish to urge the President to own up to Kenyans that he has been incompetent and incapable of running a country from the first day, and holding independent institutions at ransom while harassing and tormenting leaders who tell him the truth will not save him from the wrath of hungry and angry Kenyans.

Indeed Chief Justice (retired) David Maraga was not wrong when he suggested that the President should have been impeached by now.