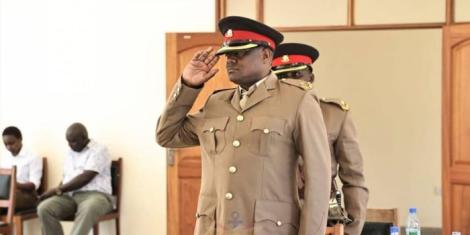 Major Ibrahim Juma Wasike of the Kenya Defence Forces was sentenced to five years and eight months in prison on January 20 after a Court Martial found him guilty of recruitment fraud.

The Court Martial convened at Lang’ata Barracks in Nairobi and was presided over by two Senior Military Officers and the Principal Magistrate of the Makadara Law Courts.

According to a KDF statement, Wasike was found guilty of extorting Ksh100,000 from a candidate hoping to be recruited into the forces.

Wasike allegedly conspired with an accomplice pretending to be able to recruit the complainant in February 2021.

Furthermore, the general was accused of extorting Ksh60,000 from another interested candidate using the same mobile money transfer service.

Each count resulted in a sentence of two years and ten months, which will run concurrently, according to KDF.

Wasike, on the other hand, was given 21 days to file an appeal against the sentence.

Wasike’s sentencing occurred in the midst of complaints from Kenyans about the integrity and transparency of the recruitment process.

Despite the Ministry of Defence’s firm stance in denying corruption allegations in the forces, the institution faced harsh criticism during the 2021 recruitment as a cross-section of the public complained about the alleged skewed nature of recruitment.