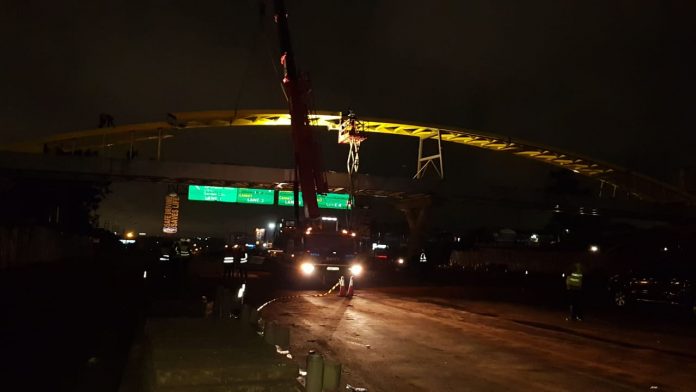 The installation of four ultra modern footbridges along the Thika Superhighway was completed early Monday morning.
KeNHA Director General Peter Mundinia said the authority had worked round the clock to complete the works. Mundinia thanked motirists for cooperating with the contractor during the hoisting of steel structures over the weekend.

“KeNHA appreciates the support and maturity of motorists during the hoisting of the steel structures and we apologies for the inconvenience caused”, Mundinia said.

He urged pedestrians to utilize the bridges, constructed at a cost of Sh.350million and warned boda boda riders against turning the facility into a short cut to cross the super highway. “We will arrest boda boda operators on these bridges. Let them utilize the road set aside for motorized traffic.

The foot bridges at Survey and Tusker area were constructed by Four Ways Construction company. The foot bridges aesthetics have excited motorists using the super highway. The project is funded fully by the Government of Kenya.