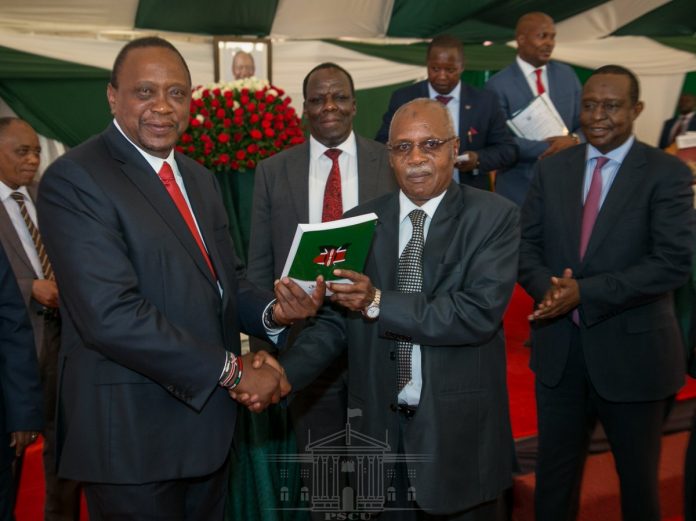 Kenya is set to become the first country in Africa to apply the methods used in the African Peer Review Mechanism to strengthen its devolved government system.

The African Peer Review Mechanism, that was pioneered by countries including Kenya, has seen African nations review each other on governance and economic policies leading to improvements in performance in participating countries.

Kenya was first peer reviewed in 2006 and has been the first to undergo a second review in 2017.

The report of the second peer review was launched today at a function held at State House, Nairobi, where the plan to apply the same mechanism to counties was announced.

President Uhuru Kenyatta, who gave the keynote address at the function, said he was pleased with the tremendous progress attained by Kenya through the APRM.

The President said that he is happy that Kenya will set the pace in cascading the peer review mechanism to strengthen the efficient delivery of services at the county government’s level.

“Kenya will be among the first countries to customise the APRM mechanism to the second tier of governance and I believe this will foster democratic dialogue between leaders and citizens in the delivery of services,” said President Kenyatta.

President Kenyatta said Kenya will continue subjecting itself to peer reviews and is ready for the third APRM.

The milestones mentioned in the second review include the promulgation of the constitution of Kenya in 2010 and the establishment of the devolved system of government (County Governments) which has progressively resolved issues of perceived marginalization.

Other milestones include the successful establishment of constitutional commissions and independent offices.

President Kenyatta said the Government is committed to continue improving service delivery to Kenyans and is ready to deal with challenges identified in the APRM report.

Some of challenges identified in the report include the issue of gender equity in governance, insecurity largely attributed to terrorism; containing the overall cost of the devolved system; diversity management for national unity; corruption and the quest for transformative leadership; and poverty and inequality.

The Head of State said following the review, the government has developed a National Plan of Action (NPoA) which outlines the President’s commitment to the implementation of the recommendations made in the report.

President Kenyatta said he will continue spearheading efforts to unite all Kenyans adding that the aim of his call for a united country is not political.

“When we say we want to be committed to bringing Kenyans together this is not a political agenda. There is no political intention of hurting this person or fighting this person,” said the President.

He urged politicians not to politicise the efforts to unite Kenyans because there is no hidden political motive.

“Let us stop politicising everything. This is a challenge we have as a country and we can only deal with it together,” said the President.

President Kenyatta also called on Kenyans to be united in the war on corruption because the country has to deal with the vice in order to achieve progress.

CS Rotich, whose ministry is the focal point for the APRM process in Kenya, called on all government agencies to support the peer review activities.

Governor Oparanya, who is the chairman of the Council of Governors, said county governments are ready to embrace the peer review mechanism once its modalities are established.

The Chief Executive Officer of APRM Pof  Al-Amin Abu-Manga reiterated Kenya’s willingness to continue being subjected to the peer review mechanism and the achievements it has recorded over the years.