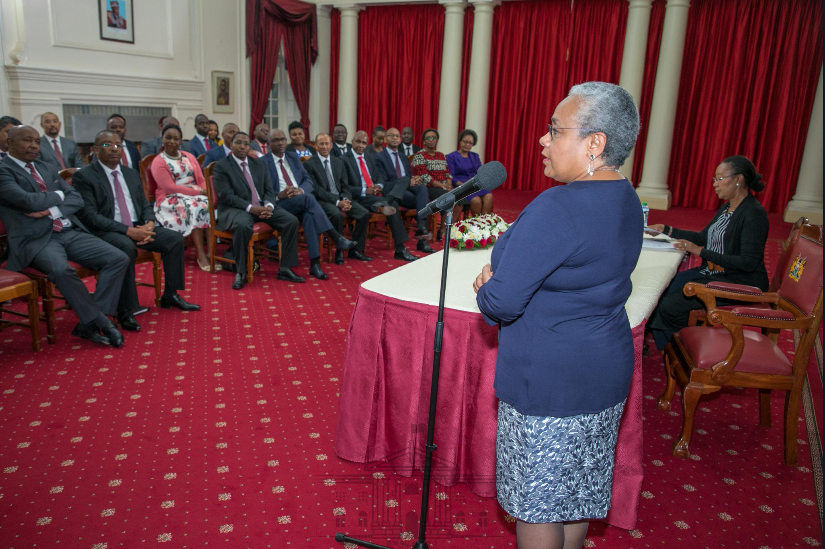 The Kenyan First Lady expressed optimism that resources raised through this year’s Beyond Zero Marathon will help scale up the provision of health services to vulnerable women, children and the youth in Kenya.

She thanked the private and public sectors as well as ordinary Kenyans for supporting her work through the Marathons, saying it has helped in the provision of much needed modern medical equipment and services.

“This work is done through direct support from partners in the public and private sectors and also support from ordinary citizens who mobilize resources by running with me in the Beyond Zero Marathons,” she said.

The First Lady was speaking today in Addis Ababa, Ethiopia, during the 22nd Ordinary General Assembly of the Organization of African First Ladies Against HIV/AIDS (OAFLA), which she co-chaired in her capacity as Vice President of OAFLA, with First Lady Adjoavi Sika Kabore of Burkina Faso who is the President of the organization.

First Lady Margaret Kenyatta invited her fellow First Ladies to Kenya to participate in the 4th edition of the Marathon slated for March 10.

She observed that Kenya is currently at full-scale implementation of the Point of Care Technology for early infant HIV diagnosis.

“This has accelerated the diagnosis to less than 24 hours, leading to early initiation of treatment and improved follow up for mothers and their children,” she said.

First Lady Margaret Kenyatta affirmed her support to the
First Ladies collective pledge of eliminating Mother-to-Child Transmission of HIV as well as other campaigns that OAFLAD has prioritized in previous Strategic Plans such as ending child marriage and female genital mutilation.

“As the national champion of the eMTCT, I have advocated for increased resources to scale up programmes for the attainment of less than 5 per cent mother to child transmission rate in readiness for the World Health Organization validation,” she said.

“We have scaled up our work in advocacy by supporting initiatives that accelerate policies centred on mother and child health,”she added.

Implementation of the 2nd Strategic Framework of the Beyond Zero Initiative that was launched in March 2018 includes the Beyond Zero Medical Safaris which is a new and innovative approach of delivering health services.

During a Medical Safari, service providers are concentrated in one location to provide integrated health services among them HIV testing; cervical, breast and prostate cancer screening; and screening for physical and intellectual challenges for children and young people.

“So, far we have impacted over 10,000 people and will continue to work throughout the country over the next year,” First Lady Margaret Kenyatta told the meeting.

She emphasized her commitment to advocating for the elimination of obstetric fistula, pointing out that the Beyond Zero Medical Safaris have already restored dignity to over 100 women, some of whom have suffered for decades.

Madam Kabore, the OAFLA President said that the change of the organization’s name marked a new beginning that heralded more commitment to serving vulnerable groups.

Ethiopia’s First Lady Zinash Tayachew urged the First Ladies to embrace the spirit of love and care as they carry out their work of improving the welfare of vulnerable people.

In a communiqué issued at the end of the meeting, the First Ladies committed to advocating for the wellbeing of the most vulnerable persons on the continent with renewed vigour.