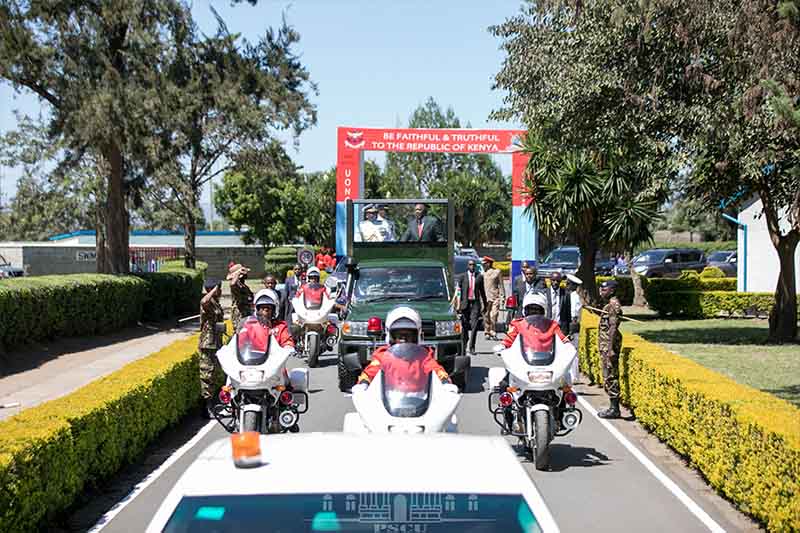 President Uhuru Kenyatta said Kenya’s military training programmes are designed to serve security needs of both the country and the region.

The President said some of the most challenging crimes that trouble nations are cross-border in nature and perpetrators shift bases whenever they come under heat in one country.

The Head of State spoke at the Kenya Military Academy in Lanet, Nakuru County, where he commissioned new cadet officers who have completed a rigorous three-year training program that involves academic as well as character development and field training.

President Kenyatta said the training standards at the Kenya Military Academy are recognised in the region and the whole world. The academy trains cadet officers from several African countries.

“The spirit of joint training reflects the true spirit of regional security partnership as enshrined in the East Africa Community Treaty,” the President said.

He said the regional dimension of the training by the academy is informed by the fact that the threats to security posed by terrorist groups and related international crimes know no borders.

“Whenever these groups are pursued, they quickly shift their operations either within the boundaries of nations or beyond,” said the President.

The President said Kenya has always made it a priority to boost regional security and that is one of the reasons it has been involved in stabilizing countries affected by conflict.

He said Kenyan troops will continue operating in Somalia until after the threat posed by the forces destabilizing the country and the region are neutralized.

“In pursuance of this objective and that of the international community, our troops will continue being part of AMISOM until such a time that this objective has been achieved,” the President said.

President Kenyatta reiterated that a country’s prosperity depends on how well it balances the crucial factors of peace, security, governance and sound economic policies and development programs.

He said that is why military officers are encouraged to observe personal courage as they protect the country despite adversities they might face.

“These values need to permeate all sectors of our society, in adequate measures, in order to enable us vanquish the evils of terrorism, political intolerance, corruption and lawlessness,” the President said.

The newly commissioned officers have graduated under the revamped Bachelor of Science in Military and Security Studies programme, a unique undergraduate degree offered by the Ministry of Defence in collaboration with Kenyatta University.