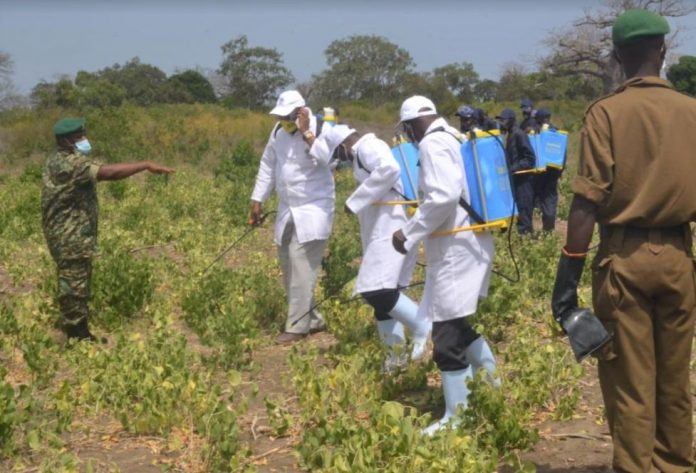 Kilifi County Government has launched an operation to spray the destructive locusts which invaded the county late last year. – By Ramadhan Kambi.

It is in that region where the locusts hatched to nymph/hoppers, the very destructive stage of the desert locust life cycle.

The event was witnessed by County agriculture and livestock chief officer Fredric Kaingu who was also the chief guest together with area MCA Albert Kiraga.

Mr Kiraga said the insects could cause serious damage in the next 60 days if not controlled and that is why they have now embarked on the operation to wipe them out through ground sprays and boom sprayers, using 3000 liters of Pentagone ULV and 800 liters of Deltametrin EC pesticides.

The exercise is to be carried out in all the seven-sub counties in areas with traces of the destructive insects.

“The scouts are drawn agriculture and NDMA to learn on the biology and behaviours of the pests and carry out surveillance using GPS tool to a consolidated surveillance report with GPS coordinates,” said Mr Kaingu.

The desert locusts insects were first spotted in Kilifi in December 3rd and within two days, they had spread across the entire county.

The county then dispatched a team of officers from the Department of Agriculture Livestock and fisheries, Disaster Management Unit and NDMA for surveillance in Magarini.

The team s report highlighted to the County Steering Group (CSG) that although the locusts were adults and were not harmful, they would after hatching cause food security threat in our county.

The CSG strategised with an Action Plan with a raft of measures to eliminate the locusts.