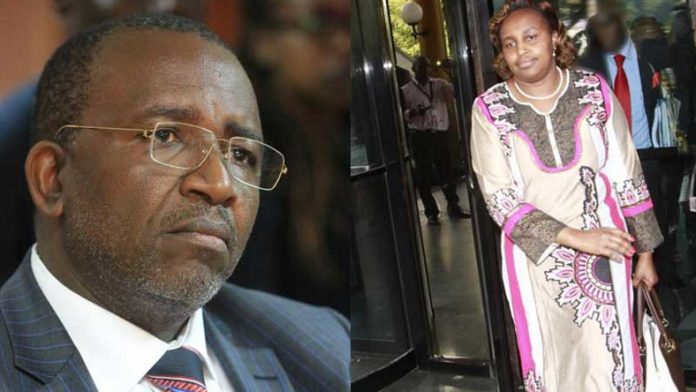 An ugly divorce case between Maryann Kitany and Meru senator Mithika Linturi proceeded yesterday, with Kitany spilling the beans on a controversial trip that stopped the Tabling of an impeachment motion by the Meru senator.

Having worked in the DP’s office during Linturi’s election as Igembe South MP, Kitany was tasked to deal with Linturi’s numerous complains, that saw the beginning of frequent interaction with the legislator. When all seemed to be well between the two, The DP’s office sought her services to be able to deal with an Impeachment motion that Linturi had against Kirinyaga Governor, Ann Waiguru.

At that time in 2014, Waiguru was in the middle of a storm over the Sh791 million National Youth Service (NYS) scandal, currently being heard in Court.

On the material day which Linturi had to table the motion, Linturi accompanied Kitany to a steamy retreat at Sopa Lodge in Naivasha under what she mentioned was a well calculated move with orders from above.

“We were in Sopa lodges … parliament was going on …our relationship started going because the public felt that I had given him money to sponsor the motion,”she said.

After the trip to Naivasha, Kitany claims that they were deeply in love and she sought to introduce Linturi to her parents and siblings. Linturi then moved into Kitany’s house in Kileleshwa, abandoning his Four bedroomed house along Ngong’ Road.

Senator Linturi and Kitany are in the middle of an ugly divorce.  Kitany maintains that she was married to Linturi and they invested in several businesses together, even building the disputed Runda home together.

However, Linturi claims that she was just a visitor at their house. His daughter has also sworn an affidavit confirming that Kitany was only a visitor.

The senator has said he has only one wife and produced a marriage certificate to show that he was legally married and he could not marry a second wife.

But if Kitany’s confession is antything to go by, there is more than meets the eye concerning the NYS scandal, a possible cover up and imprisonment of the ‘small fish’ in the scandal.