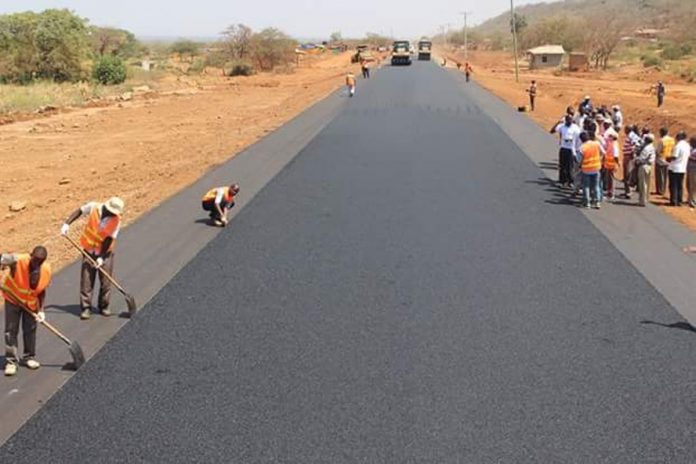 Road infrastructure has been flagged as a key plank in economic development by the Uhuru Kenyatta administration – By Gerald Gekara & Henry Kimoli.

The road was previously a campaign tool since 1952. Since then three Presidents, Jomo Kenyatta, Daniel Arap Moi, and Mwai Kibaki failed to actualize the project.
Uhuru made it s priority and is now completed, thanks to his commitment to open up Ukambani and link it up with LAPSETT.

In his first term, President Kenyatta completed more than 1,000 kilometers of road work every year.

“My administration has built 1,000 kilometers of tarmacked roads every year.  This is 44 times more than what the colonial administration built, and more than 4 times what the first three governments built collectively per year,” the President recollected during Madaraka Day celebrations at State House.

In Lamu County, kilometers of tarmac has been laid down, to improve paths which were initially used as doney tracks, common in the area.

Also launched is the 15-kilometer dual carriageway to Lamu Port under the LAPSETT project.
The Dongo Kundu bypass, scenic beauty that breezes along the Indian Ocean is a sight to behold.

And soon, thanks to President Uhuru, a bridge across Likoni will be completed, according to The China Road and Bridge Construction Company who were awarded the tender.


The Mombasa Mariakani Road has also shaped up, with motorists enjoying zero congestion, at the entry to Mombasa.

Under KeNHA Director General Peter Mundinia, the Mombasa Port Road improvement network has opened up the tourist hub into a modern trade center.

With game-changing infrastructure expected to be used in the Mwache- Mteza bridge that connects Kwale from Mombasa, the Japanese investment is set to change the face of Mombasa County as we know it.

Upcoming artists such as Coast-based Musa Ali have recorded their videos with the bypass infrastructure, hence promoting enterprise.

The works are being implemented by the Kenya National Highways Authority(KeNHA). Other roads under their mandate include Turkana-Lodwar-Nadapal class A roads, which are all tarmacked and are currently in use.

In Nairobi, the spectacular Outering Road link that connects the Eastern bypass to the Thika superhighway has been completed.

Despite challenges arising from the Coronavirus pandemic, the Western Bypass and Nairobi overpass are well within project timelines and may not be affected, as the contractor upholds safety measures to ensure that none of the workers has contracted the virus.