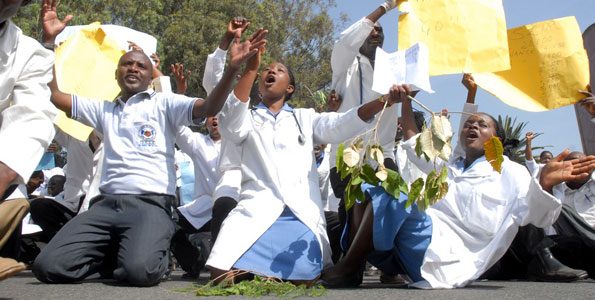 Nurses across Kitui County will go on a work boycott on Monday next week, the county union branch has announced.

In a press statement circulated to the media today, the Kitui Branch KNUN secretary Newton Kimanzi said the 700 nurses in Kitui will withdraw their services on February 4.

He said the medics will take the action in protest to the failure by the county government of Kitui to pay their increased service and Uniform allowances.

“We are therefore calling upon relatives and next of kin of all patients admitted in all level 3 to 5 hospitals to make arrangement to pick or transfer their patients elsewhere on or before February 4,2019 because all nurses will go on strike,” said the statement.

The press statement said that in the return to work agreement following the June to November 2017 nurses strike it was agreed that the nurses would get a phased three year annual increment of the service and uniform allowance. They payments were to be effected in 2018,2019 and 2020.

Nurses in Kitui, the statement said, have never received a penny on the agreed increment. “We have held several meetings with the administration in the County Health Ministry discussing several issues and no tangible implementation seen,” said the statement.