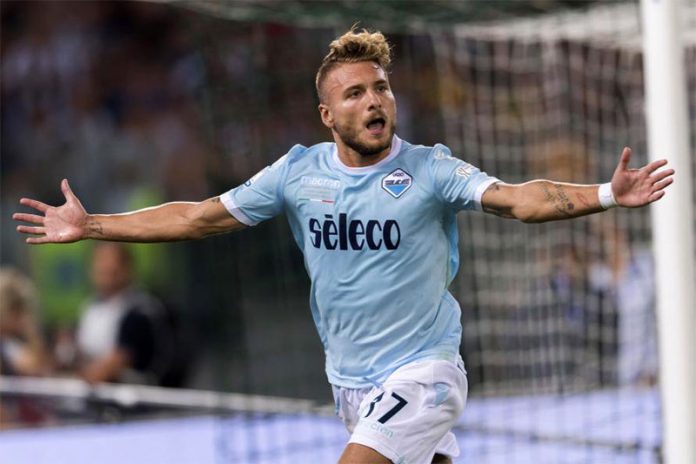 Lazio hitman Ciro Immobile will be crowned European ‘Golden Shoe’ king as the continent’s top scorer after rival Cristiano Ronaldo was left out of the Juventus squad for their final Serie A fixture of the season.

Immobile was already the odds-on favorite to bag the award, which is given to the leading scorer in European top-flight football, as the Italian ace headed into the final round of matches on 35 strikes for the season – four ahead of Ronaldo.

The 30-year-old Immobile had edged ahead of Bayern Munich’s prolific Polish forward Robert Lewandowski with a strike against Brescia in mid-week, and is now uncatchable at the top of the charts as Lazio play their last Serie A game of the season at Napoli on Saturday evening.

Lewandowski’s domestic season is already over, having been crowned Bundesliga champions with Bayern back in June.

With one eye on their Champions League last-16 second-leg against Lyon in August, and with the league title safely wrapped up, Juve boss Sarri has decided to rest the 35-year-old Ronaldo for the clash with Roma, with the Portugal star’s chances of overhauling Immobile as the continent’s top scorer in any case being slim.

Argentine forward Paulo Dybala has also not been named in the squad, while Barcelona-bound playmaker Miralem Pjanic will not feature against his former club.

READ  Willian lands at Arsenal on a three-year deal.

Juventus wrapped up a ninth successive Scudetto when they beat Sampdoria at home last weekend, before slipping to a surprise 2-0 defeat against Cagliari on Wednesday in a game in which Ronaldo failed to add to his 31 league goals for the season.

Italy international Immobile will seal a first Golden Shoe and a third Capocannoniere for top scorer in Italy even if he fails to add to his tally against Napoli.

The nearest challenger behind Ronaldo is Inter Milan’s Romelu Lukaku, who has hit 23 goals in his debut season with Inter Milan.

Portuguese ace Ronaldo has won the Golden Shoe four times during his illustrious career, the last of those coming in the 2014-15 season, when he scored a remarkable 48 goals in 35 La Liga games with Real Madrid.

Perennial rival Lionel Messi has won the award six times in total, including for the past three seasons running, but will now be displaced by Immobile, who becomes the first Italian to win the accolade since Roma icon Francesco Totti in the 2006-07 season.

Immobile could make even more history if he is on target against Napoli as he eyes Gonzalo Higuain’s all-time record mark of 36 goals in a single Serie A campaign, set when the Argentine was as Napoli.

Kenyan athletes made a resounding comeback to track as the first leg of the 2020 Diamond League went down Friday night in...
Read more
Sports

Davies was born November on 2, 2000). He is a Canadian professional soccer player who plays as a left-back or winger for...
Read more
Sports

Why Davies display against Barca should retire Messi

By Henry Kimoli
READ  Kenyan Cheruiyot, Kipyegon and Obiri shine at Monaco Diamond league meet
Few people in the world of sports…other than the Bundesliga had interacted with the work rate...
Read more

Davies was born November on 2, 2000). He is a Canadian professional soccer player who plays as a left-back or winger for...
Read more
Load more

Newspaper is your news, entertainment, music fashion website. We provide you with the latest breaking news and videos straight from the entertainment industry.