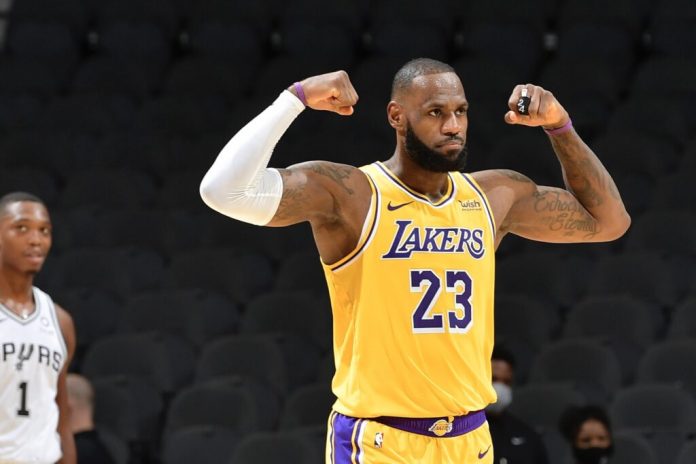 LeBron James and Kyle Kuzma led the way for the victors, who improved to 24-11 overall with their second straight win following a 4 game losing streak.

Lebron who was playing in his 1300th regular season game, added 6 rebounds, 4 assists, 2 steals and 2 blocked shots in just 24 minutes on court.

The Los Angeles Lakers may be turning things around even with the absence of star forward Anthony Davis. The NBA champions who lost 5 of their 6 games with Anthony sidelined, have now won 2 games straight.

“When you lose a mega-piece like AD, it’s going to take some time both offensively and defensively,” said James.

He added that the Lakers were becoming more comfortable in the roles they have had to adopt with Davis sidelined, an absence that Lakers coach Frank Vogel said called on them to develop a “little bit of a new identity”.

Stephen Curry was limited to 16 points for the Warriors and they also suffered the loss of Draymond Green with a sprained left ankle in the second quarter.

A solid showing from Stephen Curry was nowhere enough for the Warriors, who fell to 19-16 overall as their three-game winning streak came to an end.

Sunday was a chance to build on their latest win and prove the losing streak was just a blip on the radar and not a more troublesome sign.

It poured in 41 points in the opening quarter with Marc Gasol and James hitting multiple threes each, Dennis Schroder through the defense and drawing contact, and Kyle Kuzma providing a spark off the bench.

LeBron hitting from the outside makes him impossible to guard, and the game was essentially over as soon as the Purple and Gold quickly jumped out to a commanding lead.

It was the type of dominant showing that has been missing for Los Angeles since Davis was sidelined and a solid reminder to the rest of the league how dangerous this team can be even when LeBron isn’t putting up eye-popping numbers.