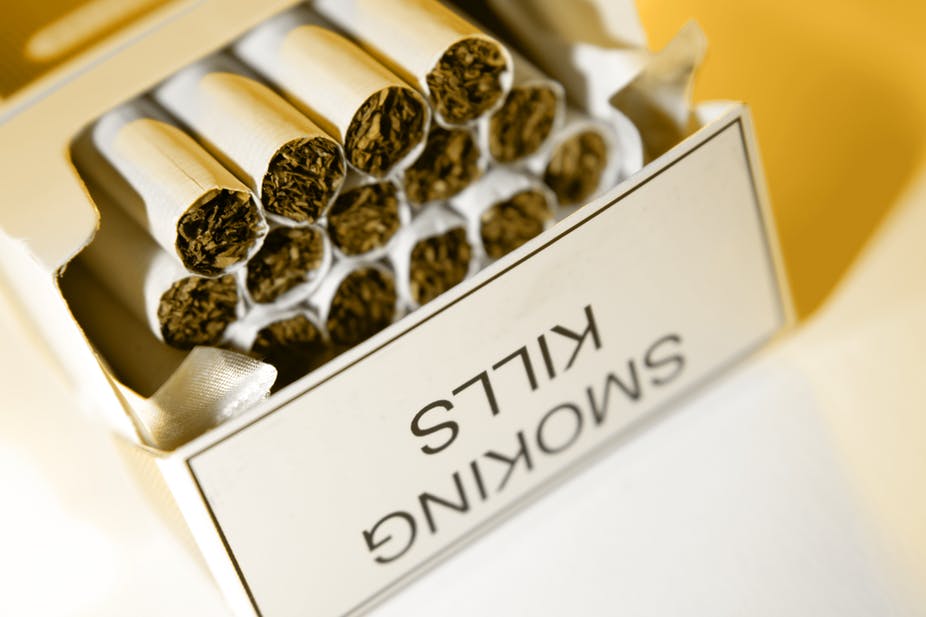 Ghana recently joined only a handful of countries in Africa to introduce the use of pictures in health warnings on tobacco products. The other countries include Burkina Faso, Cameroon, Chad, Djibouti, Egypt, Kenya, Madagascar, Mauritius, Namibia, Senegal and Seychelles.

Research shows that large, picture-based or pictorial health warning labels on tobacco packages are an effective strategy to reduce tobacco use. Several studies have shown that labels are effective if they communicate the health risks of tobacco use and increase knowledge.

Estimates of tobacco use in Ghana are lower than in other countries in the west African region. Nevertheless, tobacco use is still considered to be a public health threat. It’s estimated that between 5% and 8% of the country’s population smokes.

In 2004, Ghana was among the first few countries to ratify the World Health Organisation (WHO) Framework Convention on Tobacco Control. The treaty was developed to spearhead the global response to the tobacco epidemic. But the country has been slow to implement many of the articles in the convention. These include recommendations on excise taxes as well as the introduction of pictorial warning labels on cigarette packs.

It’s a welcome move that Ghana – even belatedly – has moved on at least one of the interventions recommended by the WHO: the introduction of warning labels. The WHO recommends the use of full-colour images. These include pictures depicting various body parts affected by diseases related to tobacco use.

We conducted a qualitative study in 2014 – prior to the introduction of pictorial warnings. The research was done by the Kwame Nkrumah University of Science and Technology’s School of Public Health along with colleagues from the Food and Drugs Authority. Our findings showed that both smokers and non-smokers felt a combination of both pictures and words was more effective than just words on their own or just pictures on their own in conveying the health dangers of tobacco.

Ghana’s tobacco control measures are governed by the Public Health Act of 2012. The act legislates several aspects such as smoking in public places, tobacco advertising as well as packaging and labelling.

In 2016 the country’s Food and Drug Authority made use of the act to compile the Tobacco Control Regulations. Provisions introduced under the regulations mandated the tobacco industry – tobacco product manufacturers, wholesale distributors and importers – to ensure that all tobacco packaging had health warning labels in the form of a picture and text.

The stipulation was that warnings must cover 50% of the front and 60% of the back of all packaging. The industry was given 18 months from January 2017 to comply with the new rules.

These regulations supplemented rules introduced in 2010 that required text-only warnings on cigarettes packages. All tobacco products sold in Ghana are now required to have pictorial as well as text warnings.

Ghanaian authorities are also taking special measures to ensure that pictorial health warnings are implemented successfully. For example, the Food and Drugs Authority embarked on successive nationwide sensitisation and training for all law enforcement agencies such as the police, customs, judiciary, Ghana Health Service, opinion leaders and all stakeholders involved in tobacco control to raise awareness of the pictorial health warnings.

The introduction of the pictorial warnings forms part of a new education campaign in the country to increase people’s knowledge about tobacco use.

It’s too soon to tell what difference the warnings will make to tobacco consumption, if any. But we were able to establish initial reactions to the new packaging by conducting interviews with stakeholders in tobacco control on the introduction of the pictorial warnings.

It is suggested that the new packaging could help Ghana curb the health, social, environmental and economic consequences of tobacco use.

Olivia Agyekumwaa Boateng, Head of Tobacco & Substance Abuse at the Food and Drug authority in Ghana, contributed to this article.