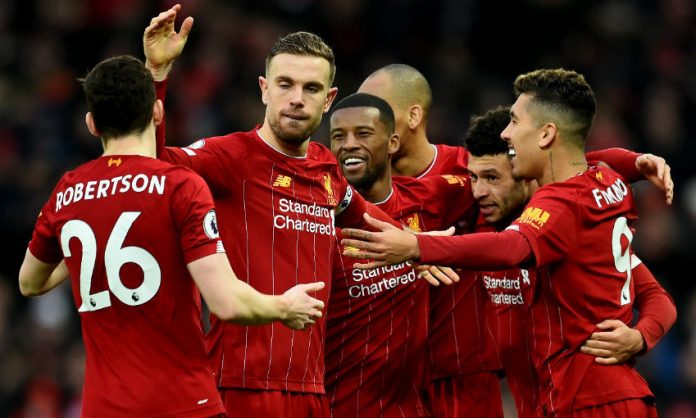 Jürgen Klopp was delighted with his Liverpool team after a very important 2-0 win away at Sheffield United in the Premier League on Sunday.

The Reds returned to winning ways with a well-earned victory over Sheffield. Curtis Jones’ strike and a Kean Bryan own goal saw the Reds move to within two points of fourth place in the Premier League.

Curtis who opened the scoring at 48 minutes said that the goal was dedicated to their goalkeeper Allison.

Liverpool left out goalkeeper Alisson Becker on compassionate leave following the death of his father Jose in Brazil. In his stead came Adrian, who has already this season won and lost 7-2.

Bryan’s own goal, which was at first awarded to Roberto Firmino, was Liverpool’s 7,000th goal in top-flight football and saw Klopp’s players go sixth in the standings, within two points of fourth-placed West Ham.

Meanwhile, Sheffield United remain rooted to the bottom of the table with just 11 points, further reducing their chances of pulling off a remarkable escape from relegation this season.

The hosts were competitive throughout, they had good moments, they came close to scoring but as with them so often this season, they didn’t take their chances when they came.

It is only 8 months since Liverpool clinched their first league title for 30 years but Klopp’s side  have had to altar their ambitions this season and now find themselves in a a battle to secure Champions League qualification.

Klopp said, ” Plenty of people have written us off. That’s fine. With all the problmes we have had we’re still around the exciting places.”

“This was about us showing we’re still there. We play Chelsea on Thursday, we have to show it again. We have to win football games, we know that. There’s no way into the Champions League without results.”

Liverpool may have only beaten the Premier League’s bottom club, but they did it well.There could have been more reward as Salah missed a great chance. It was Firmino who wrapped the game up for Liverpool.

In the course of the week, Fabinho could be back in full training and Diogo Jota will also be available. Alisson should return for the visit of Chelsea on Thursday night. Fifth against sixth, in the battle for fourth.