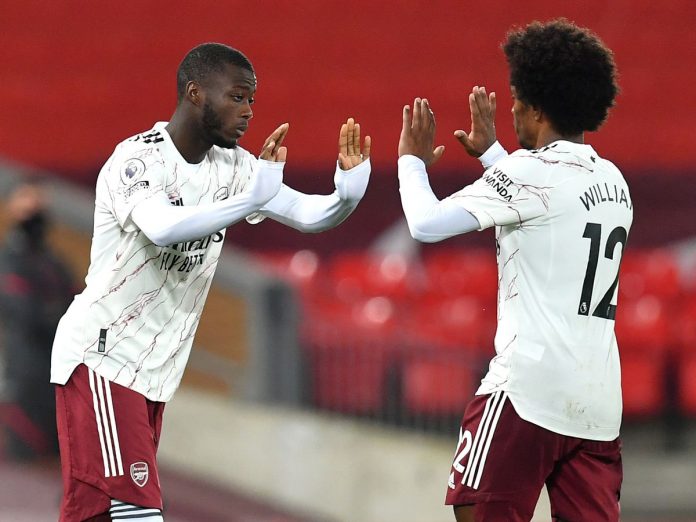 Goals from David Luiz, Alexandre Lacazette and Nicolas Pepe saw Arsenal come from behind to beat Leicester 3-1 in the Premier League on Sunday at the King Power Stadium.

They moved back into the top half of the Premier League with one of the most impressive victories of Mikel Arteta’s reign. They conceded early for the second week on a row, but were back in form soon after.

Mikel saw his players win away against a top three team for the first time since 2015 and was mostly delighted with the contribution of David Luiz, Lacazette, Xhaka and Willian.

“People have been critical of Willian but he wasn’t ready to accept that situation and he has been really good in training these last few weeks,” said Arteta. “He changed the game when he came on late against Benfica last week and I thought he was terrific again.”

“It was the same with all the senior players: Laca, Nicolas Pepé, David Luiz and Granit Xhaka all showed the heart and passion we needed to execute our game and set such a good example to the rest of the players.”

Xhaka attempted to pass to Willian but Youri Tielemans picked offand somehow managed to run unchallenged all the way into the Arsenal area, firing an angled shot into the far corner.

Willian and David Luiz may have combined for a Gunners goal for the first time, but the pair have linked up to find the net in the Premier League before when they were at Chelsea.

A header from David Luiz and a penalty from Alexandre Lacazette turned the game on it’s head before the half-time whistle.

The header was Luiz’s first Premier League goal since October 2019 and it could not have come at a better time for his strugging team.

Meanwhile, Pepe kept up his good form with his fifth goal in 18 matches in the league. He has now matched the tally he recorded in 31 appearances last season.

His performances this season have often attracted criticism but there has been a significant upturn in form recently, with the club-record signing scoring in 4 of his last 7 starts.

Without the injured James Maddison, Leicester suffered a further blow shortly after the restart when Harvey Barnes hurt himself stretching for a Tielemans pass and had to be carried off the field.

Leicester City will face Burnley on Wednesday 3rd March while Arsenal will take on Burnley next Saturday, followed by the first leg of their Europa League last-16 tie against Olympiacos. Three days later they will host north London rivals Tottenham.