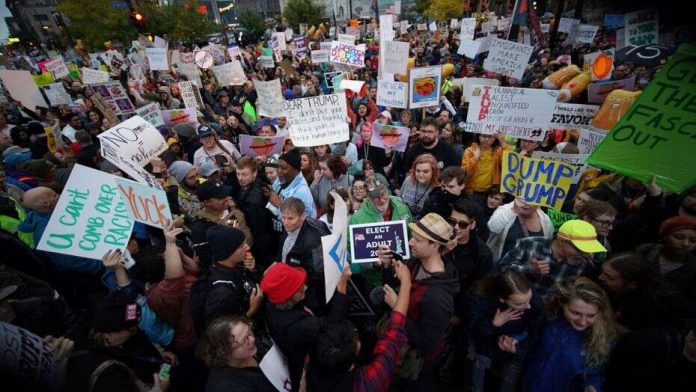 Some of the largest US demonstrations, with more than 10,000 people, occurred in the nation’s capital, Washington, DC. There, protesters waved placards with the words “No justice! No peace!”, “I can’t breathe” and “Black lives matter”.

With such large crowds, by now, you could possibly expect to see an increase in the number of registered coronavirus infections – but that has not been the case so far.

According to the US Centers for Disease Control and Prevention (CDC), COVID-19 symptoms may appear two to 14 days after exposure to the virus.

Across the country, the average number of daily confirmed cases has gradually been on the decline. Different cities are at very different stages in the fight against the pandemic, yet all 50 states have now taken steps to reopen following weeks of coronavirus restrictions.

We looked at the numbers from a few key locations where large protests are known to have taken place.

Minneapolis is located in Hennepin County. The Midwestern county currently has 9,567 confirmed coronavirus cases. The city has seen sustained protests since May 26, the day after Floyd was killed. Over the past 15 days, new coronavirus cases have decreased compared to the 15 days prior.

The US capital has recorded 9,474 confirmed coronavirus cases since March. Demonstrators have amassed near the White House for 13 consecutive days with more protests expected this week. DC, too, has seen a decrease in COVID-19 cases over the past 15 days.

New York City is the US’s most populated city. It also has been one of those that have been hit the hardest by the pandemic. The East Coast city has recorded 207,993 cases of COVID-19 this year. On Sunday, Mayor Bill de Blasio lifted the city-wide night curfew that he ordered a week earlier to prevent looting and other violence triggered by Floyd’s killing. New confirmed cases dropped by more than 5,000 cases over the past 15 days.

Cook County is home to Chicago, the country’s third most populous city. With 83,271 reported coronavirus cases, the county has one of the highest figures in the US. On June 7, Chicago’s mayor lifted the city’s 9pm curfew, which was put in place on June 1 as protests began to sweep the country. Confirmed cases, meanwhile, have dropped sharply from 19,355 cases (May 10 – May 24) to 8,392 (May 26 – June 9).

Los Angeles is the US’s second most populated city. Los Angeles County – where the city resides – has registered a total of 65,945 confirmed cases since March. New coronavirus cases have increased over the past few weeks which experts have attributed to a slower shutdown and crowded living conditions, among other factors.

Data for the rest of the country (irrespective of where protests occurred) shows that out of the US’s 3,141 counties, 1,421 saw an increase, 1,198 a decrease and 522 had the same number of reported coronavirus cases since Memorial Day on May 25 compared to the 15 days before.

Across the world, health officials will be closely monitoring the figures where large protests have taken place.

In many countries, authorities have banned demonstrations due to health concerns, but protesters showed up nonetheless.