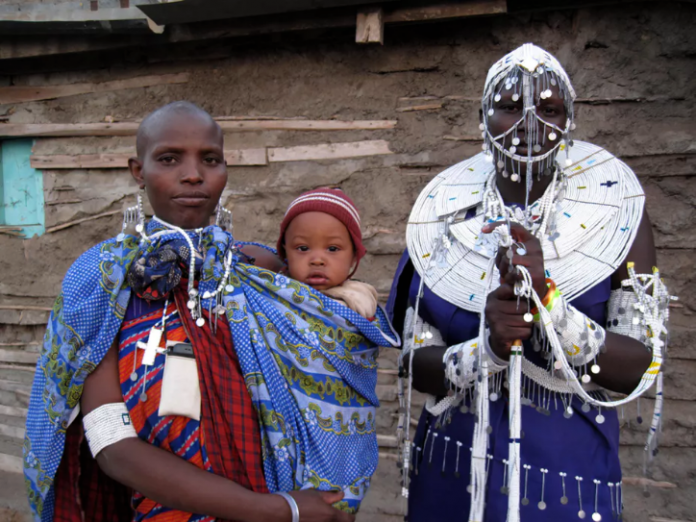 Maasai warriors wearing red and women wearing beads have come to be seen as symbols of “traditional” Africa. These colourful glass beads and red blankets play an important role in Maasai culture.

For thousands of European tourists who travel to East Africa, a visit would be incomplete without buying beads and blankets. What few know is the intricate cultural interconnection between Africa and Europe that resulted in these “traditions”.

Glass beads actually come from Europe. To this day, they are imported from the Czech Republic. The red blankets originally came from Scotland.

Glass beads first arrived in Africa from the first millennium AD through the trans-Saharan and coastal trade. Because they were produced in India they were very expensive and only used by royalty.

From 1480 onwards, the mass export of beads from Europe to East Africa started from Venice and Murano in Italy, Bohemia and the Netherlands. By the late 19th century huge quantities of beads were being used as trade goods.

Although beads were readily available, the Maasai did not develop an interest in them for quite some time. The Iltalala age-set, who were warriors from 1881 until 1905, were the first to use larger numbers of beads to decorate themselves. An age-set is an institutionalised stage in life which is shared by people that are in the same age-category. Maasai age-sets are determined by the circumcision-ceremonies of boys, which initiate them into warriorhood. The time of circumcision defines who belongs to a certain age-set.

The age-sets have names and their members used to paint their bodies and shields to distinguish themselves. When the colonialists prohibited warriors from wearing their weapons in public, the Maasai instead began to wear beaded ornaments which made a public statement about the wearer.

The Iltalala age-set, who were warriors from 1881 until 1905, were the first to use larger numbers of beads to decorate themselves.

Beadwork can tell you several things about the wearer. Specific ornaments and colours indicate whether the person is Maasai or from another ethnic group. Different Maasai clans also use certain beads and colour combinations to indicate their affiliation. Finally, a person’s beadwork reflects his or her position in life. The belt of a young woman is different from the belt of a young man, and an unmarried girl’s earrings are different from those of a married woman.

Within those cultural rules, beadwork fashion changes all the time. Each new generation develops a particular style, including certain materials, colour placements and symbols that unite and identify them. In the spirit of creative competition, the girlfriends of a new age-set make new ornaments to ensure that their men outshine the previous age-set.

Other changes in the fashion result from a shortage of beads of certain types or colours for trade reasons. A good example is the blocking of the Suez Canal during the third Arab Israeli war in 1967.

Rivalry between age-sets also sparks change. Competing age-sets have often chosen to incorporate symbols of adopted technology. For instance, the Iseuri age-set, which was circumcised in the 1950s and 1960s, chose the telegraph pole as their symbol, as a reference to the speed of communication between warriors and their girlfriends.

The next major age-set, the Ilkitoip, elaborated on this theme by adding a large button eye on top of the telegraph pole to symbolise the swirling blue light of a police car. Succeeding age-sets created ornaments with a helicopter rotor blade because helicopters are faster than police cars.

Tourists are often quite surprised and a little disappointed when they find out that Maasai beads are imported from Europe. They would like African beadwork to be “authentic”. And it’s true that some ornaments have more cultural meaning than others.

Some are adapted to tourists’ preferences. For instance Maasai women started to use colours and designs they would not normally use in their own beadwork, just because tourists liked them. And ornaments for tourists are often made of cheaper Chinese beads.

Some items have such symbolic significance that they cannot easily be sold. An example is the Elekitatiet belt, which a woman makes for her daughter-in-law when she has delivered her first baby.

Nowadays uncircumcised boys in the city wear beaded necklaces in Rastafari colours, and warriors buy beaded straps that give their watches a Maasai touch.

So Maasai beadwork continues to be the result of the interaction between European and African cultures, and there is nothing isolated or timeless about it. Rather than exotic, static and detached, it forms an ever changing, multi-cultural realm of exchange of materials and ideas between Africa and Europe.