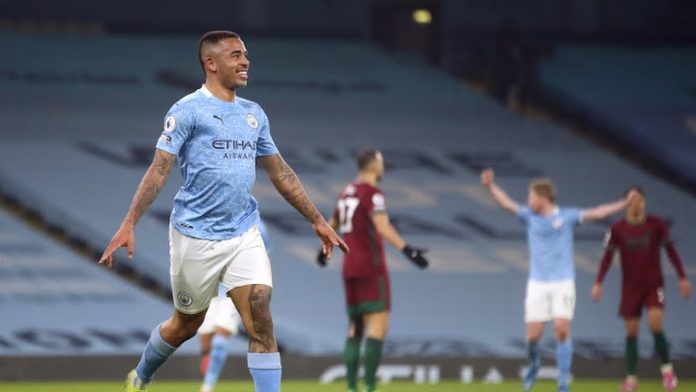 Unstoppable Manchester City opened up a 15-point lead on top of the Premier League table with a 4-1 win and outstanding performance against Wolverhampton on Tuesday at Etihad Stadium.

The victory was their 21st in a row and their 15th straight Premier League win. City have not trailed in any of their past 19 Premier League games, equalling Arsenal’s record set in 1998/99.

Heading into the final 10 minutes at Etihad Stadium, City’s players were in the unusual position of being held, 1-1, but there was no panic.

Instead, they just stepped up a gear, overwhelmed Wolves with their pressing and scored three goals. Leander Dendoncker had given City the lead for the first time with an own-goal in the 15th minute.

City finished strongly in response with Jesus claiming the goal on 80 minutes before Riyad Mahrez added another goal and the Brazilian finished thigs off with the last kick of the game.

They matched their own 28-game unbeaten run by avoiding defeat here and can surpass that streak in Sunday’s Manchester derby.

City’s winning streak is the third-best streak among teams in Europe’s leading five leagues, behind only Bayern Munich’s 23 in a row in 2020 and Real Madrid’s 22 successive victories in 2014.

Wolves’ only good spell of the game came after Coady scored a header in the 61st minute, his first Premier League goal, which was their first touch in City’s box.

Guardiola hailed his fantastic team but said his only focus was on the next game, against cross-town rivals Manchester United, who are City’s nearest challengers.

He said, “Manchester United. That’s all we care about now. The champions are Liverpool, the crown belongs to them. We are in the best position right now to take them out and we are going to try but they are the champions.”

“There is 33 points to play for. Tomorrow our opponents will play, we have one or two days off and prepare for Manchester United at home.”