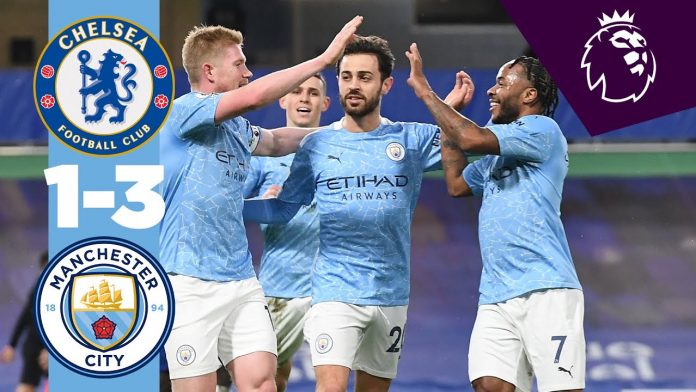 Manchester City shrugged off the loss of six players to Covid-19 to beat Chelsea 3-1 on Sunday to reignite its English Premier League title challenge.

But all that was put behind them with a blistering first half performance at Stamford Bridge that left Frank Lampard’s Chelsea reeling.

Goals from Ilkay Gundogan, Phil Foden and Kevin De Bruyne gave City a winning buffer, with the home side unable to make much of an impression until Callum Hudson-Odoi scored a late consolation.

City is up to fifth place in the standings, four points adrift of leaders Liverpool and cross-city rival Manchester United, with a game in hand, while Chelsea remains eighth.

De Bruyne played a central attacking role because of City’s depleted squad, with Gabriel Jesus one of those on the sidelines after a positive test.

“The way we won championships in the past is the way we played today,” he told Sky Sports, singling out Foden for his performance.

Chelsea, by contrast, has won just one match in six, and a fifth league defeat raises question marks over head coach Frank Lampard, who took over at Stamford Bridge in the summer of 2019.

That was painful in the first half for the players,” Lampard told Sky Sports.

Chelsea made a bright start, but the good work was undone by two goals in quick succession from the visitor.

It was Foden on target next, three minutes later, as he swept home De Bruyne’s low cross with the Chelsea defense in disarray.

Lampard made changes in the second half to little impression on the game, but two of the substitutes combined for an injury time goal as Kai Havertz charged forward to release Hudson-Odoi, who finished neatly.

Earlier, Leicester City took closer order in third place in the standings with a 2-1 win at Newcastle, leaving the Foxes one point off the top having played a game more.

Aguero, Alaba for Barcelona? — Transfer Gossip Round up