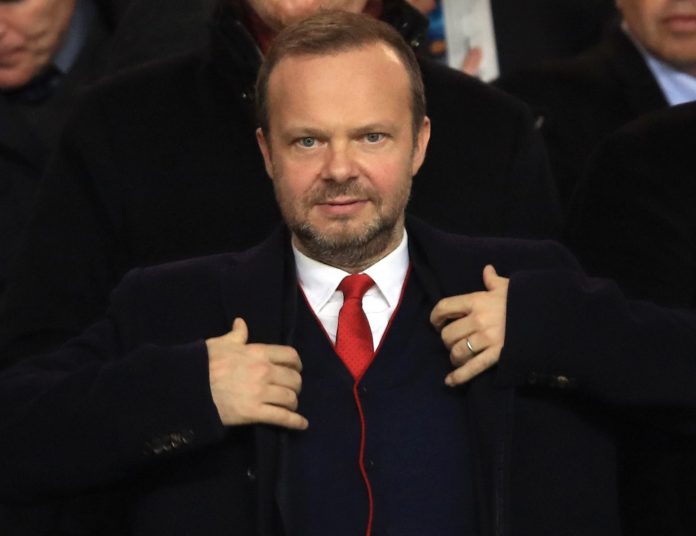 MANCHESTER UNITED fans have been left furious after Rio Ferdinand revealed his startling treatment at the hands of Ed Woodward.

But his departure in 2014 was described as surprisingly abrupt, for which he blames executive vice-chairman Woodward.

Ferdinand told The High Performance Podcast: “I’ve not even said goodbye to the fans.

“You normally get an idea if you’re going to get a new deal or not, one way or the other, before the last day of the season.

“Someone normally comes to you, the CEO Ed Woodward, to say, ‘We’re not giving you a new deal’ or, ‘We know you’re not going to sign, so look for pastures new’. I didn’t get either of them.

“On the last day of the season, we played Southampton. The game finishes and I come into the changing room.

“The directors always come into the dressing room to shake the players’ hands – Bobby Charlton and Ed Woodward.

“[Ed] sat next to me after the game, with my boots still on, and said, ‘Listen, we’re not going to renew your deal. Thanks for your services at the club. You’re free to go on and speak to other clubs’.”

“I was like, ‘Wow, is that the way it’s going to end? Surely you could have given me a heads up before so I could have a little bit of a goodbye with the fans’ but I was just numb.

“Because it got to so late in the season, I thought there probably would be a role for me here, either playing or coaching, because they surely would have told me before this day.

“But it never happened and I just felt that I deserved to say goodbye to the fans, the people at the club, the dinnerladies… I wasn’t afforded the time to do that. I was bitter for a while, if I’m honest.

“That was what really made me start thinking that this place isn’t being run properly. This is not how the best team in the world should be doing things.”

Many felt the episode served to underline the club’s decline since the 48-year-old took charge in 2012 – with just one Premier League trophy won since.

One United Twitter account wrote: “Rio explaining how he was told he wasn’t getting a new contract at United. A prime example of the incompetence of Ed Woodward in the role he has at the club. Unreal treatment of somebody who gave so much to United.”

Ann added: “Shocking way to treat someone that gave so much to the club over the years.”

Dave wrote: “Woodward’s arrogance is unbelievable the bloke has a lot of power but no idea how to use it.”

Another fan tweeted: “This is a disgrace. Get Ed Woodward out of my club.”

And Pranit commented: “This is why we hate Glazers and Woodward.”

Ferdinand’s experience appears to be far from unique, however.

He revealed: “I think he was desperate for me to stay, he did everything.

“Before the end of that season in 2013, I remember he said, ‘Patrice, you’re going to stay for another year because we’ve got an option [in your contract]’.

“But I said, ‘I wish I can but I can’t’. I needed to leave because of family reasons. He shook my hand and said, ‘I understand, we won’t sign your option’.

“Then in May I was having dinner in Dubai on my birthday and had a text from my agent. He told me to go somewhere quiet, that he was going to send me a message and for me not to get angry.