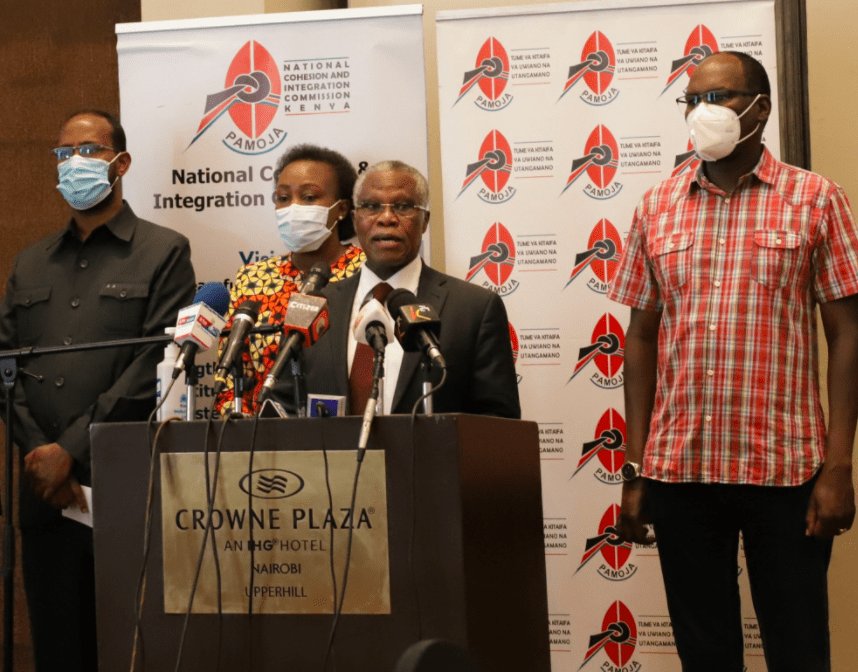 The National Cohesion and Integration Commission (NCIC) has urged Kenyans to be vigilant and prepared to report threats to peace in their communities in the run-up to next week’s elections.

The Commission’s Chairperson, Samuel Kobia, advised Kenyans on Friday to maintain peace even when contesting election disputes and malpractices, and encouraged them to seek redress through peaceful and legal means.

Kobia, speaking after a joint meeting with election stakeholders on how to improve cohesion and political decency, stated that the toll-free number 108 will be available for reporting any cases.

“Since elections are now just 4 days away, we as peace actors would like to call on other peace actors and Kenyans to intensify vigilance and be ready to report any threats to peace in their communities. Remember you can send a text to the toll-free. number 108,” Kobia stated.

Kobia advocated for close monitoring of online spaces, claiming that they are the primary channels for spreading hate speech and inciting violence.

He also urged law enforcement and human rights organizations to devise mechanisms to mitigate negative use of these spaces and catalyze prosecutions for incitement to violence without regard to political affiliation.

“The Uwiano Platform for Peace would therefore like to call for Close monitoring of all social media spaces, including the dark spaces like political WhatsApp and Telegram groups,” he stated.

“We ask the international community to be ready and release emergency support and response to areas that may experience any form of electoral disturbances,” he added.

Police Spokesperson Bruno Shioso assured Kenyans that their security is a top priority during the election campaign, noting that the police force is prepared to deploy at least 150,000 officers to provide security during the August 9 General Election.

“Kenyans should not fear but rather confidently play their role in the elections and leave everything else to the agencies charged with security to do their part,” stated Shioso.