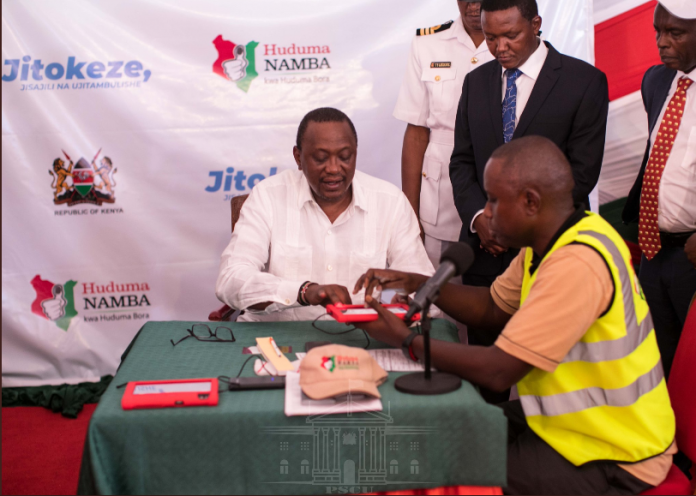 President Uhuru Kenyatta today presided over the national launch of the new Huduma Namba, a project that seeks to identify all Kenyan residents through a unique primary identifier.

The President kicked-off the National Integrated Identity Management System (NIIMS) by signing up for his own Huduma Namba and flagging off the registration kits to all the 47 counties.

He rolled out the NIIMS project at the Masii Public Grounds in Machakos County while Deputy President William Ruto simultaneously kicked off the exercise in Kakamega County.

In a historic demonstration of national unity and common purpose, key opposition leaders trooped to three other launch sites to witness the roll out of the 45-day Huduma Namba registration drive which they all hailed as an important exercise.

With the historic launch of the NIIMS project, Kenya now joins other developed nations such as the US, Europe, United Arabs Emirates, India and Australia  which have successfully used integrated data systems to manage their citizens information.

President Kenyatta said the NIIMS exercise will not only transform civil registration and data management in the country but also tame corruption and fast-track the implementation of the Big 4 development agenda.

“Huduma Namba will reduce delays and corruption in the delivery of services such as cash transfers for elderly persons and vulnerable children, issuance of passports and border control,” he  said.

He added: “ NIIMS  will facilitate faster and more effective implementation of the Big4 agenda.”

The President said the NIIMS registration exercise will be able to verify the actual number of government employees including civil servants that include teachers and other cadres.

He said an audit of the Kenya Police Service undertaken last year had discovered about 5,000 ghost officers who were receiving a monthly salary of over Shs 148 million.

President Kenyatta said NIIMS aims to establish and maintain a master digital national population register that will serve as the only single source of identification for everybody resident in Kenya.

“It will integrate personal and functional data that is scattered in many government agencies into one single identity,” said the president adding that the number will be used at all stages of one’s life from birth to death.

NIIMS is used to save biometric (fingerprints and facials only), demographic and physical details of Kenyans and registered foreigners, an exercise that also aims at enhancing national security.

The new Huduma Namba will not invalidate, instead it will harmonize other national registration processes like the sign up for Identity Cards, National Hospital Insurance  Fund (NHIF) , National Social Security Fund (NSSF), Birth and Death certificates or the Personal Identification Number (PIN) among others.

NIIMS will assist in issuing persons resident in Kenya with a primary identifier that will consolidate the other registration numbers in one digital wallet. The other numbers will become secondary identifiers.

The new Huduma number is aimed at enhancing the speed and efficiency of service delivery to all residents of Kenya.

Calling on Kenyans to take advantage of the next 45 days to register, President Kenyatta said there are several reasons why the government is making the extraordinary effort to undertake the biometric registration for everybody living in Kenya.

“The need for accurate data as a key enabler for national planning, issuance of birth and death certificates and associated rights of nationality, schooling, passport and property ownership are all valid reasons for the registration,” said the President.

He said Biometric identification and registration of farmers will facilitate fairer allocation of subsidized farm inputs including seeds and fertlizers.

“It will also improve accountability and transparency in the management of National Health Insurance Fund and inform planning, investment and allocation of affordable housing units,” the President said.

He said the NIIMS exercise will also facilitate and monitor capitation in schools adding that Kenyans will no longer be required to carry multiple IDs and, pensioners and widows will receive their dues with much ease.

Besides reducing transaction costs for Kenyans, said the Head of State, the new Namba will significantly reduce cases of identity theft and make financial and property transactions more secure.

President Kenyatta said a bill is currently being drafted to address concerns raised by Kenyans about security of the NIIMS DATA.

“Once passed by PARLIAMENT, the law will give you (the individual) a right to obtain a copy of the particulars of your personal data in the NIIMS database, restrict data sharing, and ensure security of the data against unauthorised access,” he said.

President Kenyatta criticised some church leaders for spreading lies and misleading Kenyans about the intentions of the biometric registration exercise.

Interior CS Dr. Fred Matinag’I ,under whose docket the new initiative is being co-ordinated assured the President of precision and efficiency in  the registration exercise.

He also promised to update the President on a daily basis about the status of the exercise.

Others who spoke at the launch ceremony included   the three governors from the lower Eastern counties including the host Dr Alfred Mutua (Machakos), Charity Ngilu (Kitui) ,Prof. Kivutha Kibwana of Makueni and  the local MP (Mwala) Engineer Vincent  Musyoka (Kawaya).