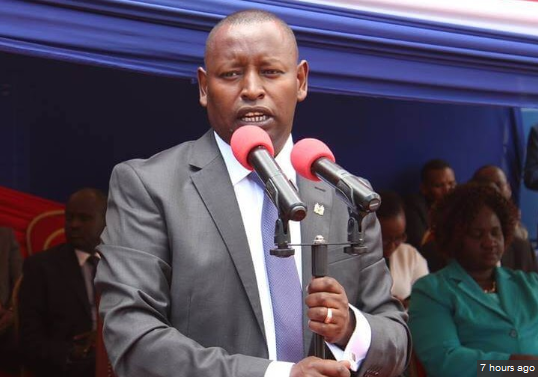 By PRUDENCE WANZA – The Samburu county Governor, Moses Lenolkulal has been charged of corruption and mismanagement of public resources at the Milimani law courts.
The Governor was arrested this morning and has been accused of payment of money unlawfully to Oryx service station which he owns. The Governor is alleged to have contracted the service station to supply fuel to the county government  with a payment of Ksh. 84.6 Million.

Appearing before Chief Magistrate,  Douglas Ogoti at the Anti-corruption court division, he pleaded not guilty to the four charges that he is accused of.
The prosecution led by, Alexander Muteti, has requested the court to issue orders that the governor stays away from the county government offices for  24months since the nature of the offenses touch directly to the discharge of his duties as a governor and if allowed to continue discharging his duties justice may be compromised in the matter.

The court has directed that the governor be prohibited from accessing the county offices until the formal application is heard and determined.
The other thirteen accused persons who are accountants of the county government of Samburu have also been directed to keep off the county government accounts and that they should present themselves in court on Thursday, 4th April.
Governor Lenolkulal will be released on a bond of Ksh. 150 million and an alternative Ksh. 100 million. The court has cited that it can not overlook the charge against him since the case involves embezzlement of funds and that the accused person was trading with himself using public resources.