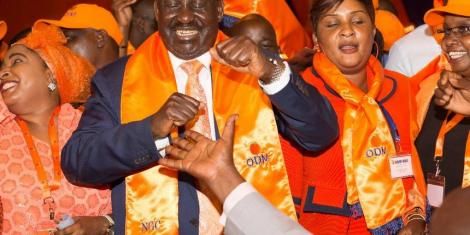 Swearing in a New Electoral board,

The Orange Democratic movement today oversaw the swearing in of new national electoral board to spear head party elections and nominations.

Those sworn in include former commissioner of the defunct constitution implementation commission Commissioner Catherine Mumma, who takes over from Judith Pareno.

Others appointed to the board include former Wajir South MP Abdulahi Diriye, Richard Tairo, Syntei Nchoe and Emily Awita.

The team takes over from another that was highly blamed for bungling party elections and nomination in 2017, something blamed for ODM dismal performance in the 2017 election.

The board also shoulders the responsibility to entrench internal party democracy and peaceful elections unlike in the past where chaos has been the order of the day.

On the disciplinary panel

Prof Ben Sihanya, a former dean of the University of Nairobi Law School, took over from city lawyer Fred Athuok as chairperson of disciplinary panel.

Others who will serve with him include Ramadhani Abubakar, Mumbi Ng’aru, Seth Kakusye and Dr Florence Omosa.

The team is instructed to restore the discipline as it also ensures cohesion and unity in the party.

An explosive audit report by a taskforce on elections for the party, chaired by Mumma, last year delivered a harsh verdict on the party organs and called for their restructuring.

The party will continue with the purge as recommended by the report and more sweeping changes are expected in the coming days.

The changes in the party are a precursor to Raila`s appetite to clinch the 2022 presidency.

Leaders including David Murathe and COTU boss Francis Atwoli have endorsed the ODM boss to succeed president uhuru Kenyatta who is serving his last term.

“We think it’s time Kenyans rewarded the years of struggle of Raila Amollo Odinga. They owe it to him. It’s like Mandela, and 2022 will be a Mandela Moment. And we would also like to tell him (Raila) to be a transitional president who will then nurture the young generation to take over in 2027,” Murathe said.