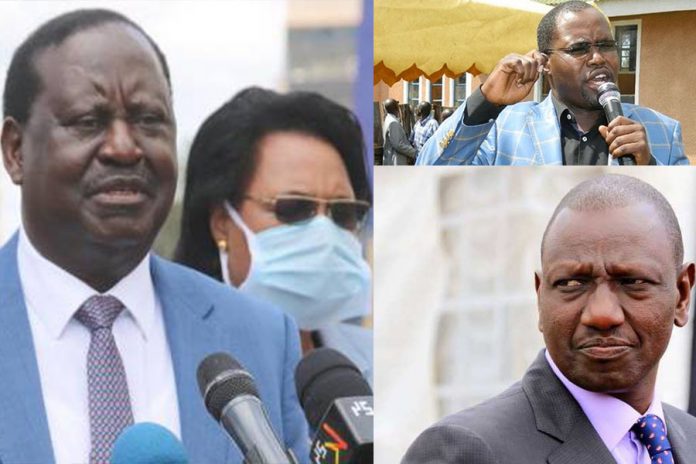 Raila Odinga took on Deputy President William Ruto and his delegation for what he termed foul play, over comments made against mother to President Uhuru, Mama Ngina Kenyatta.

He urged politicians to shun the politics of war and instead foster peace.

“Nobody should try to take this country to war again because of politics. Beating the drums of war will not work.” said Raila.

Suna East legislator Junet Mohammed who accompanied Kajiado County leaders challenged the deputy president to tone down on abusive politics, accusing him of hiring his allies to trash talk against his president.

“I want to ask the Deputy President to spare this country of politics of war. You cannot abuse other leaders including Mama Ngina.” He said.

He weighed in on the 2022 succession politics, daring the Deputy president to make himself president.

“Ruto has claimed he has made Raila Prime Minister, Uhuru president. We are waiting for him to make himself president” Junet added.

These sentiments come a day after Emurua Dikirr MP Johana Ngeno was arrested for hate speech slur against Uhuru Kenyatta.

The Deputy President, however, cautioned his allies against use of insults in their addresses.

“Leaders should exercise restraint and avoid insults and bad language against other Kenyans. Unsavory words against mothers and Head of State is a NO, NO. No amount of anger justifies the use of offensive insulting language.” Dr. William Ruto tweeted.