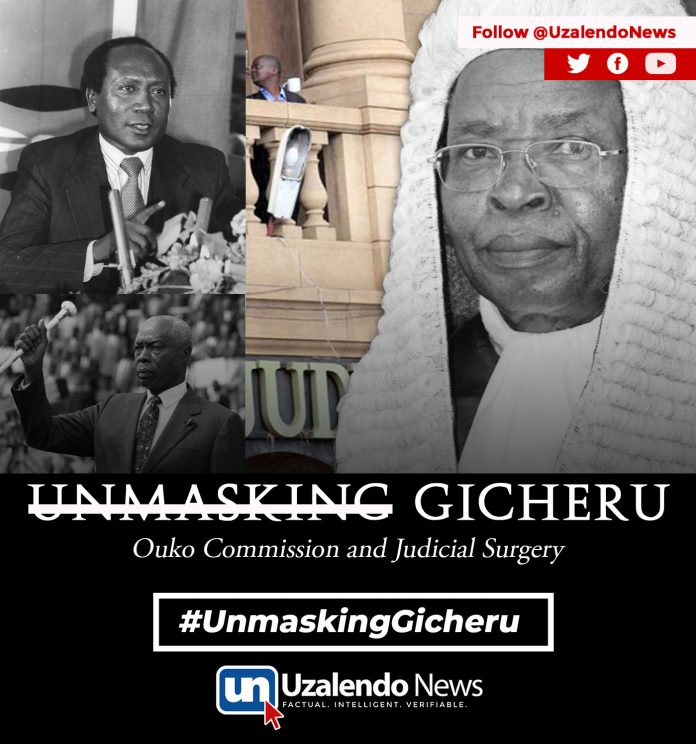 The then High Court judge was appointed to Chair the Ouko Commision of inquiry alongside one Justice Richard Otieno Kwach.

The late Gicheru collected hoards of evidence on how Ouko was tortured and murdered. He was about to nail the killers when President Moi disbanded the commission.

Prior to the disbandment, Gicheru was a marked man by the dreaded Special Branch. His room at the Imperial Hotel was bagged by the spy men, who were scared that Gicheru may bring down the then fragile Moi Government.

The late former Head of Judiciary was among the few surviving people with an ankling to the Ouko murder mystery.

Several high profile people mentioned in the Ouko murder probe have since died. They include Phillip Mule Kilonzo, the then Police Commissioner, Dr. Jason Kaviti, the Ouko pathologist, Nicholas Biwott, the former Energy Minister and Ouko nemesis among others.
Dimentia and the Aberdares mystery

Gicheru was as ruthless as they come. Despite being a close friend of Justice Kwach, he sent him packing during the famous 2003 Judiciary purge.

The purge was orchestrated by then Justice Minister Kiraitu Murungi, who used it to kick out judges said to be sympathetic to former President Moi.

Gicheru was seen as a puppet for NARC, and specifically President Kibaki, through Kiraitu.

During his reign at the Judiciary, a powerful pro-establishment cartel revolving around one of his aides.

The cartel called the shots in the Judiciary, including determining promotions, transfers sackings, and dispensation of justice.

It was during the Gicheru era that the Goldenberg assets such as Grand Regency were liquidated to the Government of Libya (the late Mohammed Gaddafi) to be specific.

As he neared his exit, Gicheru’s rural home in Kirinyaga was broken into and property of unknown value stolen. By the time Gicheru died, he suffered from a complicated disease called dementia.

At one time, he got lost in the Aberdares forest during a Christmas get-together gone awry. He was however rescued by forest guards.

He will be remembered as the CJ who “peacefully” handed over power to the opposition: the NARC Government in 2002, December.