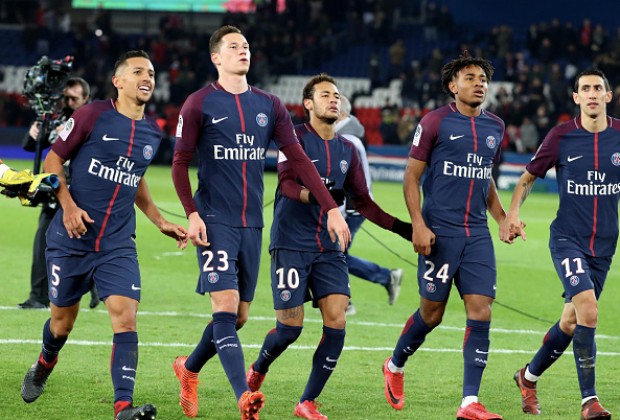 One of Europe’s biggest spenders, but also one of the continent’s most high-profile underachievers on the grandest stage, PSG finally seized their opportunity courtesy of goals from Marquinhos, Angel di Maria and Juan Bernat.

The former, who scored the first of two late goals in a comeback win over Atalanta in the last eight, rose to head home a superbly delivered free-kick from Di Maria.

The Argentine forward then finished well from close range following an audacious flick from Neymar after Leipzig goalkeeper Peter Gulacsi had relinquished possession with a dire kick.

With the fit-again Kylian Mbappe and Neymar terrorising the Leipzig backline, the French side should have been out of sight before the break, but the latter twice hit the post – from a clipped finish then an opportunist free-kick from range – before side-footing another chance wide at the near post.

Prior to PSG’s second, Yussuf Poulsen had Leipzig’s best chance but fired wide after he was found by a Dani Olmo pull-back.

Bernat sealed the win in the second half with a header that Leipzig felt was offside but was legitimate as the prone Nordi Mukiele, who had slipped in the build-up, was playing the scorer onside.

PSG will find out who they face in Sunday’s final when five-time winners Bayern Munich play Lyon in the other semi-final on Wednesday.

Front three give PSG their wings

This is glorious, but nervous, virgin territory for PSG.

The vast sums of money pumped into the French club by owners Qatar Sports Investments since 2011 has enabled them to dominate domestically. In Europe, though, not so much.

In the three seasons prior to this one they exited in the last 16, and before that they went out in the quarter-finals four years in a row – results that ultimately cost managers Laurent Blanc and Unai Emery their jobs.

Thomas Tuchel, though, has found a way to break the glass ceiling, leading the side from the French capital to their first major European final since the Cup Winners’ Cup in 1997, a year before Mbappe was born.

You cannot begrudge them it either on the basis of Tuesday’s performance, which was calm, confident and incisive, in contrast to a nervy and often negligent display from their opponents.

The first and third goals gave Di Maria his 88th and 89th assists in all competitions since he joined the club in August 2015 – only Barcelona’s Lionel Messi has more in Europe’s top five leagues in that time.

He also now has nine goal involvements in the competition this season, surpassing the tally he managed in helping Real Madrid lift the trophy in 2013-14.

Neymar’s brilliant assist took him to 23 goal involvements in 19 appearances for PSG (14 goals & nine assists) in the Champions League and while Mbappe’s finishing was rusty, he was still able to regularly fashion chances for himself and others.

When this trio have started together this season, PSG have lost just one of 12 games. With them fully fit and firing, they will be a match for whoever they face in the final.

RB Leipzig are the babies of European football, having only come into existence in their current guise in 2009 when drinks company Red Bull bought fifth-tier side SSV Markranstadt and rebranded them.

The past 11 years have witnessed a stunning rise for the club, courtesy of four promotions, a regular presence at the top of Bundesliga and now graduation to being one of the four best sides in Europe.

Past finalists Tottenham and Atletico Madrid were both dispatched en route to this stage but PSG proved a challenge too far for the youngest coach in the competition and his bold side.

Julian Nagelsmann was encouraged into coaching by PSG counterpart Tuchel when the pair were both at Augsburg and the former had seen his playing career ended at the age of 20 by a serious knee injury.

Still only 33, he has plenty of time on his side and has shown more than enough to suggest he can lead a side beyond this stage – including a switch to a three-man defence in the second half on Tuesday that gave his side a much more positive presence in the game.

For now, though, the master-apprentice dynamic remains intact.