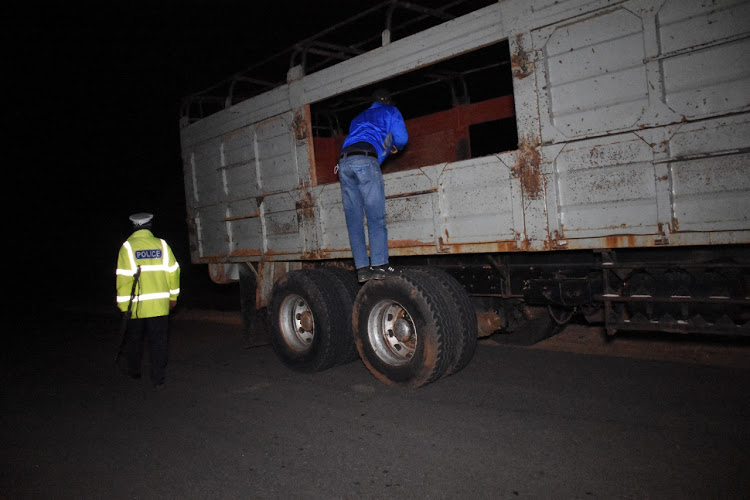 Two police officers and KeNHA road inspectors were this morning pelted with stones and injured as they pursued an overloaded sand truck at Makongeni area in Thika Sub County.

The officers are part of a special team that is leading an operation to rid Garissa – Thika Road of overloading by trucks.

Two Government motor vehicles were damaged during the melee.

The injured officers were identified as Senior Sergeant Julius Mutuku and Charles Mutune.

The officers gave chase to the fleeing lorry. At Ananas Mall, another empty truck Registration number KCC 769S, emerged from the opposite side and made an abrupt u turn on the road delibaretly obstructing the police and KeNHA crew from pursuing the suspect.

Meanwhile, the overloaded truck escaped into the nearby Makongeni sand yard. The drivers of both trucks abandoned the vehicles and fled.

Police gave chase but youths from the yard numbering about 300 pelted the officers with stones causing them leg injuries.

The officers fired in the air to scare the marauding youth but retreated for fear of causing grievous injury and aggravating the situation.

A KeNHA officer, Oscar Mwangombe was also injured on his right leg below the knee.

The culprits are being pursued.

The incident occured shortly after a joint taskforce was established to run the overloading mafia out of business.

The task force is acting on a report that the road infrastructure frequented by overloaded sand trucks were attracting high costs of maintenance.

The operation has netted over 200 truck owners who have since been fined and processed by various courts.