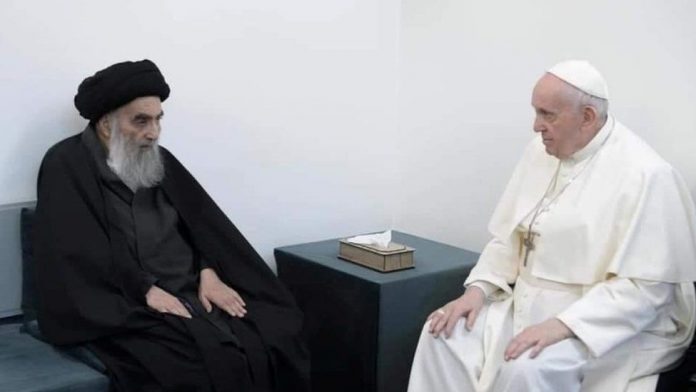 Pope Francis has discussed the safety of Iraq’s Christian minority with one of Shia Islam’s most powerful figures, on his landmark trip to the country.

Like many communities in Iraq, Christians have been hit by waves of violence over the past two decades.

The office of Grand Ayatollah Ali al-Sistani, spiritual leader of millions of Shia Muslims, said the talks had emphasised peace.

The meeting was seen as a highly symbolic moment in the Pope’s visit.

The Pope is on his first international trip since the start of the pandemic – and the first ever papal visit to Iraq.

Covid-19 and security fears have made this his riskiest trip yet.

The 84-year-old leader of the Catholic Church earlier told reporters that he had felt “dutybound” to make the “emblematic” journey, which will see him visit several sites over four days in Iraq.

What did the leaders discuss?

Iraq’s Christian minority has experienced considerable violence since the 2003 US-led invasion of Iraq.

Receiving the Pope at his home in the holy city of Najaf, Grand Ayatollah Sistani “affirmed his concern that Christian citizens should live like all Iraqis in peace and security, and with their full constitutional rights”.

Pope Francis thanked the ayatollah for having “raised his voice in defense of the weakest and most persecuted” during some of the most violent times in Iraq’s recent history, the Associated Press reports.

The Shia leader’s message of peace, he said, affirmed “the sacredness of human life and the importance of the unity of the Iraqi people”.

Audiences with the reclusive ayatollah are rare but he received the Pope for around 50 minutes, talking without face masks.

Pope Francis later travelled to the ancient city of Ur, where the Prophet Abraham – central to Islam, Christianity and Judaism – is believed to have been born.

“From this place, where faith was born, from the land of our father Abraham, let us affirm that God is merciful and that the greatest blasphemy is to profane his name by hating our brothers and sisters,” the pontiff said.

About 10,000 Iraqi Security Forces personnel are being deployed to protect the Pope during his visit, while round-the-clock curfews are also being imposed to limit the spread of coronavirus.

Some Shia militant groups have reportedly opposed the visit, suggesting the tour amounts to Western interference in the country’s affairs.

Due to security concerns and a sharp rise in Covid-19 infections, the Pope will have limited exposure to the public.

He has had two shots of the BioNTech/Pfizer vaccine, and his entourage will have been inoculated, but there are fears the trip could become a super-spreader event given the large crowds expected.

When he arrived on Friday, the Pope was seen to have a pronounced limp, suggesting that his sciatica condition continues to bother him.