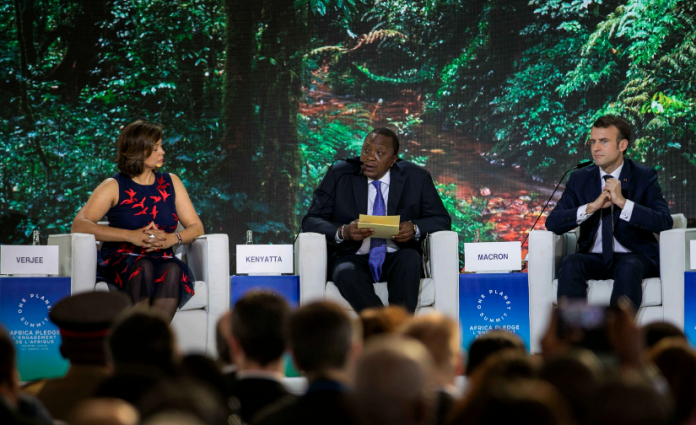 President Uhuru Kenyatta today affirmed Kenya’s commitment to achieve a minimum of 10 percent forest cover by 2022 as part of the country’s efforts to address the challenge of climate change.

The President said his Administration has identified forestry as a key sector of investment in the realization of the country’s development agenda and is implementing the national green growth strategy that has set clear restoration targets aimed at achieving the global Sustainable Development Goals (SDGs).

The President called for concerted efforts towards environmental conservation, saying forests like the oceans are the lungs that keep the planet alive.

“Investment in sustainable management in the conservation of our forests is one of the most effective interventions to combat climate change in Kenya,” the Head of State added.

The President was speaking at UNEP in Gigiri, Nairobi when he and French President Emmanuel Macron officially opened the One Planet Summit, also attended by Deputy President William Ruto and former Prime Minister Raila Odinga among other local and international leaders.

The French leader said the Nairobi summit was special because it proved that it was not only the Western world that was concerned about climate change and environmental conservation but also Africa.

“Africa is key in this project because it bears the first direct impact of climate change,” President Macron said.

President Kenyatta said the One Planet Summit which builds on two previous summits held in Paris and New York signals a strengthening of cooperation in scaling up environmental conservation and climate action.

He pointed out that deforestation and degradation of the environment ultimately undermines biodiversity conservation and climate change mitigation as well as adaptation.

“This, without doubt, leads to loss of economic productivity and has destroyed means of livelihood for many communities across the world. It has also reduced the ecological integrity of our ecosystems,” President Kenyatta said.

The President said the loss of forest cover exacerbated the impacts of climate change leading to natural hazards such as droughts, fires and floods.

At the One Planet Summit, big financial pledges to support environmental conservation and address climate chance were made.

She assured President Kenyatta that the World Bank will support Kenya’s efforts to increase its forest cover by funding the restoration of at least 60 million hectares of forest land.

“We will invest heavily in smart agriculture and in the restoration of degraded land,” the World Bank boss said.

African Development Bank (AfDB) President Akinwumi Adesina said his bank commits to provide $25 billion towards climate finance over the next five years to address the problem of climate change.

The One Planet Summit was followed by the official opening of the Fourth Session of the United Nations Environment Assembly (UNEA4) whose theme is ‘Innovative Solutions for Environmental Challenges and Sustainable Production and Consumption’.

The President noted that climate change continues to be a major threat to sustainable development worldwide and its impact places a disproportionately heavy burden on the poor and vulnerable.

“It calls for practical and creative solutions. Countries must embrace a culture of innovation and invest in education and capacity building to facilitate the transition to a knowledge society,” President Kenyatta pointed out, saying finance and technology remain crucial in this regard.

He welcomed the participation in the Assembly by traditional and spiritual leaders as well as representatives of councils of elders drawn from different regions of Kenya.

“I appreciate the role that traditional and spiritual leaders play in environmental conservation; resolution of resource-based conflicts and as custodians of our traditional indigenous knowledge and cultural heritage. I urge us all to learn from these traditional practices worldwide for the benefit of mankind,” President Kenyatta said.

“It embraces the “5 R’s” philosophy of Reduce, Re-use, Recycle, Reformulate, and Re-manufacture, cutting emissions into the environment to acceptable levels,” President Kenyatta said.

He said his administration has put in place several policy and legal instruments to control environmental pollution including imposing a ban on single use plastic carrier bags.