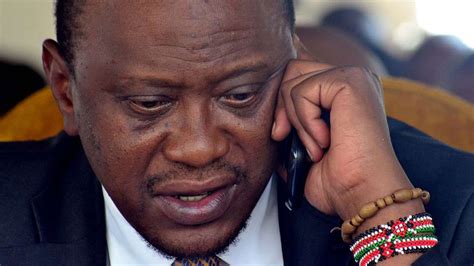 A fugitive wanted for several fraudulent actions while impersonating Kenyan President Uhuru Kenyatta has been apprehended.

The multi-agency team, which included police officers and detectives from the Directorate of Criminal Investigations (DCI), set up a trap for the suspect.

The suspects allegedly scammed a business owner out of $2 million by pretending to be President Kenyatta over the phone.

Joseph Waswa, the suspect, was previously caught and charged in court for defrauding business magnate and billionaire Merali for over ten million dollars.

It is claimed that a mobile number 0722 208842 was used to call Mr Merali and beg him to help with the release of funds for the land purchase, while imitating the President’s voice.
Mr Merali was on a business trip outside the nation when the scammers called him, according to authorities.

As a result, he gave the go-ahead to complainant Akif Hamid Butt, the Finance Director of Sameer Africa, to make the payment, believing that he had spoken with the head of State.

Mr Butt was persuaded that the money was for the purchase of land in Milimani, Nairobi, and the con artists provided him with the number of an Equity Bank account, which he deposited the money into.

The suspect is now being held at Nairobi Police Station pending charges in court.