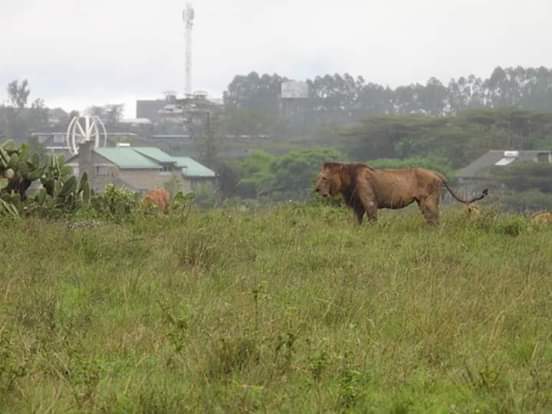 BY FAITH MUTETE – A pride of lions that was earlier spotted roaming past The Africa Nazarene University in Tuala, Rongai sub-county have been taken back.

They had been reported to have strayed from the Nairobi National Park when residents reported them on Thursday morning.

Kenya Wildlife Service response teams moved quickly to contain the lions before they could be harmed, or cause any injuries to residents.

Recently, residents living around the park have been recording interactions with the king of the jungle with some as close as Daystar University.

The park, spanning over 11,000 hectares, has been prone to security lapses, with wild animals spotted crossing into estates and traffic.

This has raised concern among Kenyans, with some speculating that encroachment and human activities around the park are to be blamed.

Nairobi’s skyscrapers which can be seen from the park, picture the proximity of urban and natural environments which has caused conflicts between the animals and Kenyans, in turn threatening animals’ migration routes.

KWS went on to further ask Ongata Rongai residents to report any sightings on their toll-free line 0800 597000.