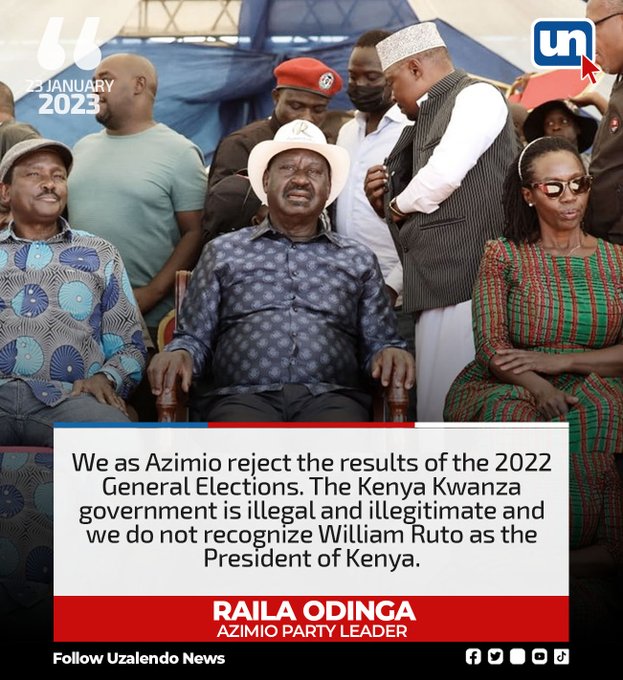 Azimio la Umoja One Kenya Coalition Party leader Raila Odinga has declared that the Azimio coalition does not recognise William Ruto as Kenya’s President due to the alleged election rigging.

Speaking at a public rally in Kamukunji, Odinga stated that the coalition does not recognise the officials appointed by President Ruto, including his cabinet secretaries.

The former Prime Minister claimed that irregularities and alleged electoral fraud marred the election process. Odinga stated that the coalition does not accept the IEBC results.

Furthermore, Odinga outlined a set of demands that he believes should be implemented in order to address the issues that have led to the current political crisis.

He has called for the repeal of high taxes, which he claims have a negative impact on Kenyans and make it difficult for them to make ends meet.

He also demanded that the Independent Electoral and Boundaries Commission (IEBC) be reconstituted following extensive consultations with all stakeholders, including political parties, civil society organisations, and other relevant organisations.

Odinga accused the IEBC and the Supreme Court of being central to the election rigging in 2022 and demanded an independent investigation.

“We demand the entire infrastructure and the records of the 2022 elections at the IEBC remain public and be audited by an impartial body,” he said.

Furthermore, Odinga demanded that the Kenya Kwanza government resign, claiming that they lack the mandate to govern the people.

He urged Kenyans to oppose President Ruto’s Kenya Kwanza government and fight for their rights and equal representation.

“We ask our people to say no to the UDA regime. This regime and its unfortunate and unfair policies must be resisted and the resistance starts today,” he said.