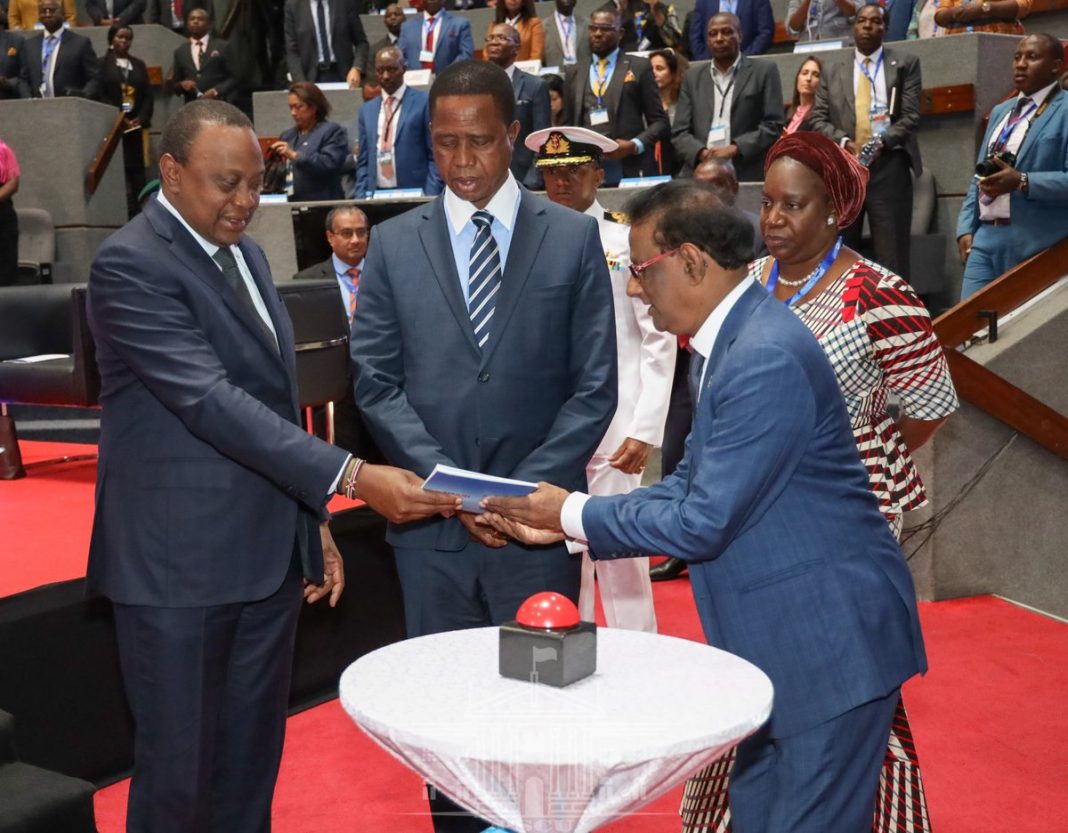 The President said all efforts to increase integration and intra-Africa trade must at all times seek to generate decent and well paying jobs for the hundreds of millions of Africa’s youth.

The opening ceremony of the conference whose theme is “Powering Regional Integration through Trade” was attended by three other Heads of State namely Yoweri Museveni (Uganda), Edgar Lungu (Zambia) and Paramasivum Pillay Vyapoory of Mauritius as well as Deputy President Dr William Ruto.

“Africa is a young continent, with about 60% of our population under 25 years. All our efforts to increase intra-Africa trade must also seek to generate decent and well-paying jobs for the millions of educated, talented, and energetic young people on our Continent,” said the President.

The Head of State said that continental integration will also be beneficial to Africa’s Small and Medium Size Enterprises (SMEs) and not the large corporations alone.

The President said the huge attendance of the summit is an indication of the role played by intra-regional trade as a driver of economic development and progress.

“As Africa embraces the movement towards a borderless territory under the recently launched African Continental Free Trade Area (AfCFTA), the business communities, both regionally and globally eagerly await the benefits of trade that will come not only with expanded markets but with the opportunities for rapid development and access to innovation and technology,” he said.

He called for more efforts to diversify and add value to raw materials produced in Africa instead of the continent being a source of raw products for the rest of the world.

“This is the situation that AfCFTA attempts to remedy by facilitating higher product diversification and higher levels of progress,” said the President.

“Our Continent is full of resources, products, markets and services that can propel interstate business to rival established configurations in Europe, America, and Asia,” the President added.

The Head of State used the COMESA forum to underscore the progress Kenya has made in reducing the cost of doing business and improving the overall investment environment.

“We have maintained a stable macroeconomic environment by promoting appropriate regulatory policies that not only support business but also attract higher volumes of Foreign Direct Investment,” said the President.

President Kenyatta said Kenya plays an important role in Africa’s economy and is among the top exporters of agricultural products.

“We are not only the world’s leading exporter of tea but also amongst the top three COMESA exporters of horticulture and floriculture products,” the President said.

On value addition, the President said Kenya’s manufacturing sector is the strongest in the region with strong links to East, Southern and Northern Africa.

He encouraged more companies to invest in Kenya’s wide range of lucrative investment opportunities that exist across various segments of the economy including infrastructure development, agri-business, manufacturing and financial services.

“I assure investors that Kenya continues to pursue a free enterprise economy and aims at building the strongest industrial base in the Sub-Saharan Africa,” said the President.

After the opening ceremony, the Heads of State participated in a presidential public private round table where they discussed issues affecting intra-regional trade in the region.

President Kenyatta emphasized the importance of digitizing African economies saying it will improve transparency and accountability.

“If we want to integrate the continent, we have to be at the same level with regard to our digitization so that the process that we are using in Kenya has interconnectivity with the processes that are being used in Uganda, in Zambia, in Mauritius and elsewhere, ” President Kenyatta said.

On his part, President Museveni spoke on the need to address bottlenecks that undermine the continent’s efforts to move out of the poverty trap.

“One of the bottlenecks is market integration. Is the market of Uganda of 41 million people enough to support large scale production? No. It is not. So this fragmented markets must be integrated,” the Ugandan leader said.

President Lungu said African governments must demonstrate political will to support SMEs for them to benefit from the AfCFTA.

President Kenyatta also launched the COMESA Source 21 handbook at the event attended by thousands of delegates from the COMESA member states. The handbook is a guide on doing business in the bloc and contains critical information on business opportunities in the region.