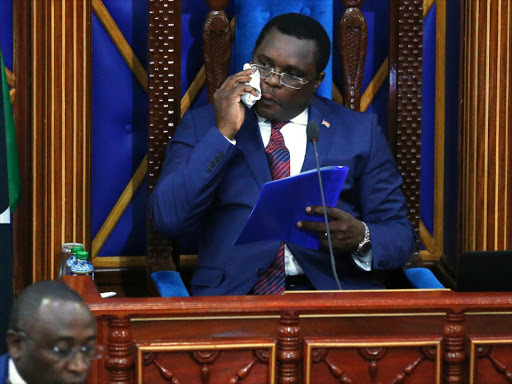 The unending revenue allocation bill embroilment in the senate may not end soon.  The house has had eight heated debate seating trying to resolve the impasse but all have ended in what seems like unprocedural adjournments by speaker Kenneth Lusaka who many senators believe is keen to have the executives position adopted as presented by majority whip Kang’ata Irungu.

The other team led by Irungu Kang’ata and seems to enjoy executive support with proponents of one man one shilling one vote also seem to be favored by under pressure speaker Kenneth Lusaka. The group has had fair share of criticism and resistance in equal measures.

The house commander speaker Kenneth Lusaka may become a causality of the bill, as he faces an ouster threat from team Kenya who are now doubting his wisdom in leading the house to resolve the impasse.

The sakaja led team has reduced the former Bungoma Governor to a puppet dancing to outsiders tune in complete disregard of the senate autonomy as an institution mandated to legislate independently. Contrary, to what is expected of a speaker.

claimed the senate speaker should be impeached for unlawfully adjourning the senate debate on the Kang’ata proposal formula debate. After being adjourned for the4th time, he wrote on twitter

In a rejoinder Sen. Ledama Olekina of Narok agreed, “I agree we can’t adjourn the Senate like a village meeting….” he said. As time rolls on slowly, it now becoming harder and harder for the bill to go through. With this week’s Tuesday debate amounting to nothing for are cord 8th time, more and more pressure is heaped on the speaker.

Now that the Senate will hold the planned Thursday meeting as anticipated to make a decision on the controversial revenue sharing formula, Lusaka’s woes deepen more. Some senators are already claiming that the speaker has deliberately bungled the whole process with a purpose to sway some senators in favor of Kang’ata’s proportion.

various amendments with the latest by Kithure Kindiki being popular with team Kenya.

‘’He doesn’t know his job anymore, and it’s actually a shame, because yesterday we could have finished all this, this thing of musical chairs is something which is shameful for this country, and I think it’s about time this people who are pushing the speaker cannot win, we have defeated them three times and Kenyans know,” said Senator Ledama.

While it appeared the lawmakers were headed to vote on the formula, a last-minute intervention by Minority leader James Orengo changed the entire course of the debate.

Orengo said the House could not vote on the final motion when there were other proposed amendments to the formula proposed by the House Finance and Budget Committee.

The amendments are fronted by nominated Senator Petronilla Were, Kimani Wamatangi (Kiambu), Ledama Olekina (Narok) and Orengo from Siaya.

In his ruling on Tuesday, the senate speaker ruled, “I order that we reconvene on Thursday to look at the two amendments and make a determination.” This was after a very chaotic sitting marred by violent scenes from some senators shouting “shame” while others shouting “curfew” giving him no option but to adjourn the session until Thursday.

The Senate should proceed to one-month recess and motion fate now lies in the majority or minority leaders to seek for a sitting with requisite members of the Senate.

Lusaka may have reprieve as Senator Mutula now believes that a process of impeaching the senator would derail all their moves. He has urged his colleagues to focus on the job ahead.

the outsiders therefore greatly impacting his mandate in the senate leadership.

The intimidation by those forces perceived now as the “system” in regards to his past deeds dating back to the wheelbarrow saga is enough to cut him as a trophy speaker. No matter the goodwill he might have for the Kenyan people and free democracy, he remains gagged and has to wait for trickle down directives from “above.”

With the laws of the land giving the senate room to impeach the speaker and his deputy, the speaker has a lot of work to do to avoid going down the same way his former deputy Kithure Kindiki went.

However, being in bed with the government his impeachment maybe difficult with interests playing center stage and the masters are on driving seat as the house looks divided than before

Lusakas fate lies in his ability to dispense the revenue allocation bill.