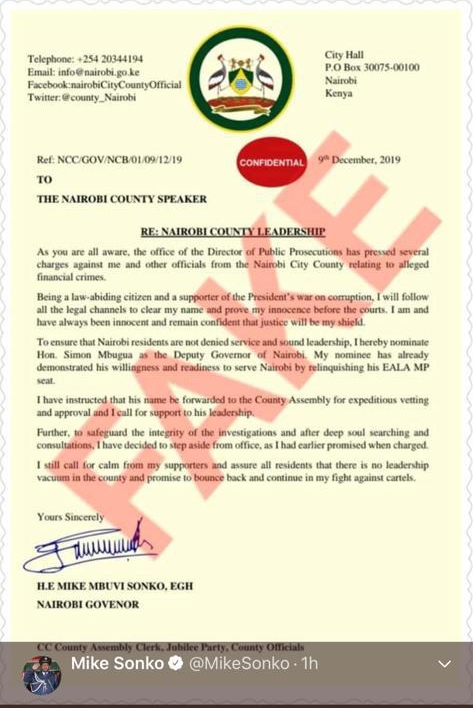 Nairobi Governor Mike sonko has declared a letter going rounds on social media in which he nominates a deputy governor to continue delegating county duties after being charged with corruption.

In the letter which was first posted on twitter by former Kakamega Senator Boni Khalwale, Hon. Simon Mbugua is said to have agreed to relinquish his East Africa Legislative Assembly seat in order to take on the duties of Nairobi County Deputy Governor.

However, Nairobi County Assembly Speaker Beatrice Elachi is likely to take over as the Governor a move which could also trigger a byelection inNairobi as the Speaker can only act for a period of 60 days.

According to the constitution, article 182(4) if a vacancy occurs in the office of a county Governor and that of the Deputy Governor or if the Deputy County Governor is unable to act , the speaker of the county assembly then act as the Governor.

In July, Justice Mumbi Ngugi ruled that the governors charged with economic crimes will not be allowed to resume their offices as they continue with their trials.

Justice Ngugi’s ruling was challenged and is still in court.