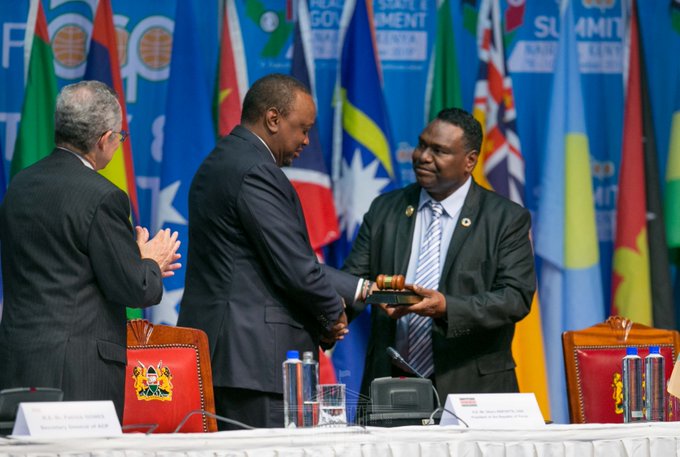 President Kenyatta said Kenya, which has taken over the chairmanship of the group of 79 countries, will spearhead reforms and reinvigoration of the ACP for the next three years.

He said that under his stewardship, Kenya will seek to promote and protect the interests of the group at the regional, continental and international levels.

“I will also champion the group’s solidarity and unity; advocate for an enhanced intra-ACP and South-South and Triangular Cooperation; Champion a Reform Agenda for the ACP Group; push for the integration of our States into the global economy, as well as the conclusion and implementation of the New Partnership Agreement,” said the President.

He said he will share his vision with the leadership of the rest of the ACP countries on  how they can collectively pursue a common roadmap for the actualisation of the transformed ACP Group.

President Kenyatta urged ACP countries to embrace innovation and technology in order to boost their economies.

He spoke during the 9th African Caribbean and Pacific Summit of Heads of State and Government at the Kenyatta international Convention Centre also attended by Deputy President William Ruto.

“We need to accelerate the implementation of structural reforms and policies and infrastructural development, targeted at fostering industrial development and diversification of our economies,” the President said.

He cited the example of Kenya which has undertaken a deliberate path of structural transformation, and identified four priority sectors, namely: manufacturing, affordable housing, universal health coverage and food and nutrition security.

“These four areas were prioritized to drive equitable and inclusive economic development and improved quality of life, create jobs particularly for the youth, and improve our economy’s resilience against the anticipated challenges posed by climate change,” said the President.

Speaking on the Economic Partnership Agreements (EPAs) between ACP and the Europeam Union, the President noted that Kenya’s wish is for further agreements with the EU that will enhance integration of ACP countries into the global economy.

“We look forward to a more balanced trading arrangement with the European Union in the New Partnership Agreement, which gives priority to emerging opportunities especially in e-commerce and trade in services,” said the President.

Other leaders who spoke at the summit included the Prime Minister of Barbados Ms Mia Mottley and the President of Ghana Nana Akufo-Addo among others.