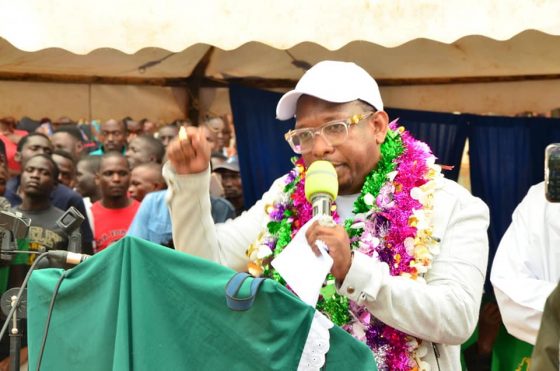 Nairobi Governor on Sunday took a jab at rogue EACC officials for allegedly being involved in land grabbing cartels.

While touring Kisii county, the flamboyant governor chose to drive all the way back shunning ‘Costly’ air travel option. While at a stopover in Kisii town, Sonko took a swipe at the Ethics and Anti-Corruption Commission, claiming they had rogue officials who were part of the lang grabbing cartels that had grabbed public land.

I thank the EACC, DCI, and DPP for the spirited war against corruption… But today we are saying all the thieves inside the EACCmust be rooted out… Those behind the Ruaraka land grabbing scandal, Integrity house land grabbing… they will all be brought to book” Sonko said.

The governor then cautioned Kisii residents against accepting to be used in the coming elections, urging them to come together and reject bad governance.

Hon. Mike Sonko was accompanied to Kisii University by Bosco Gichana, where they conducted a service at the institution and proceeded to donate to the construction of Kisii University Chapel in the Institution.

On November 5th, the embattled Nairobi governor was summoned to the EACC offices, to answer to questions regarding his self-declaration document presented when he ran for the gubernatorial seat.