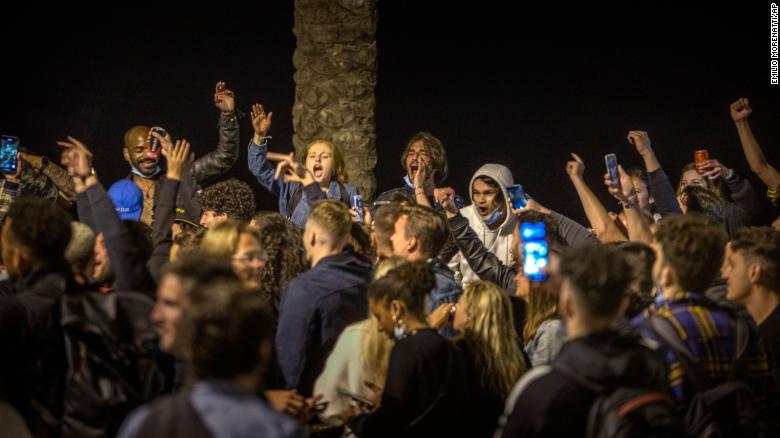 Hundreds of people partied in many cities across Spain early Sunday after the country’s 11 p.m. curfew was lifted in 13 of the country’s 17 regions at midnight.

People were seen celebrating the end of Spain’s six-month state of emergency to fight the Covid-19 pandemic on the beaches of Barcelona and the streets of Madrid.

Many people were seen without masks, disregarding social distance, and congregating in groups of more than six people, all in violation of the coronavirus restrictions that remain in place.

In the capital Madrid, police intervened to push people out of the central Puerta del Sol square, where many were dancing and singing.

“In general people in my area have been very responsible,” said Oriol Estival, a 22-year-old from Sant Celoni, a village around 50 kilometers (31 miles) from Barcelona. “Large crowds have occurred in large cities like Barcelona or Madrid. People know the places where there are no police.”

A police van patrolling Barcelona beach alerts crowds over a loudspeaker during the final hours of curfew Saturday night: “It’s prohibited to assemble in groups of more than six people, please leave the beach.”

Estival, a geography student at Barcelona’s autonomous university, said he saw groups of six drinking in his town’s park, but nothing like the partying seen in videos around Spain.

Except for a few days over Christmas when the restrictions were lifted, people have not been able to travel to other regions, go on holiday, or see family.

Spain has been one of Europe’s hardest-hit nations during the pandemic, with nearly 79,000 deaths and 3.5 million infections.