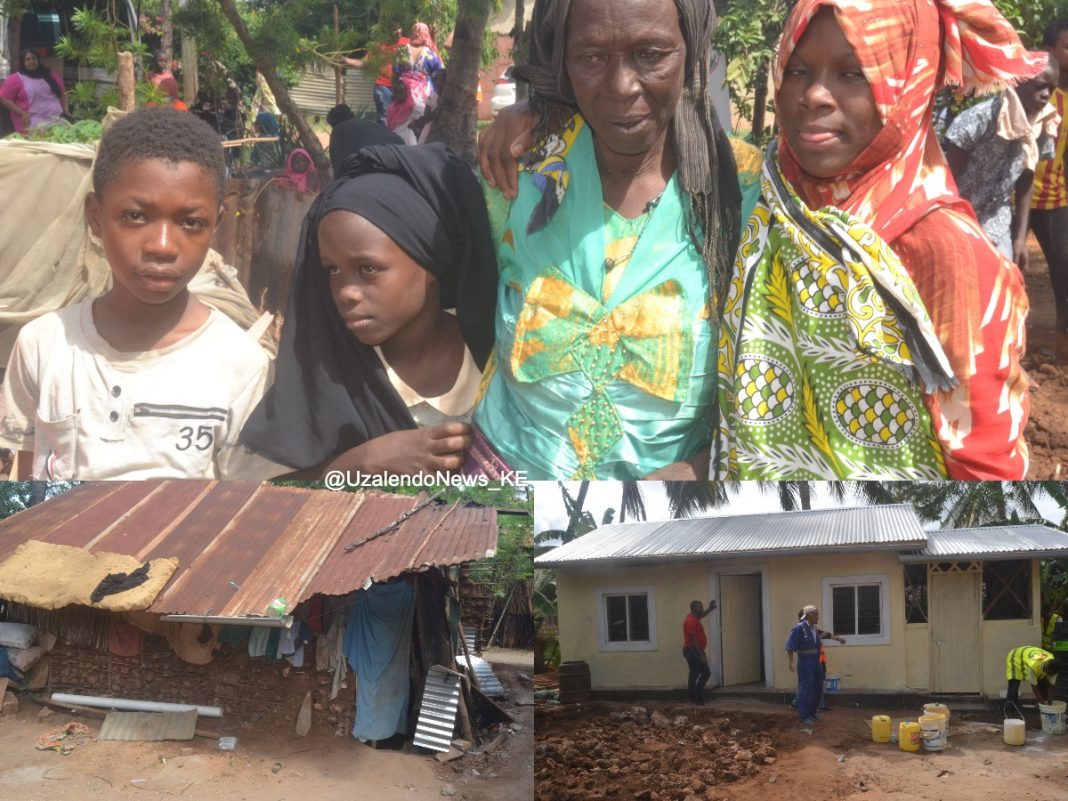 If there is anyone who doubts whether the power of social media is real, then that person needs to talk to a 75 years old widow in Malindi who now has a brand-new home, thanks to her plight shared in social media. – By Ramadhan Kambi.

Ms Rehema Sharif together with her son and four grandchildren have been gifted with a brand-new modern house after sleeping in the cold for decades in Muyeye area within the informal settlement scheme of Malindi town.

With her sorry state of living, someone shared the photos of her shanty where she has been sharing the bed with her siblings. Her plight touched the eyes and hearts of people through a Coast-based NGO that decided to build her a proper house.

The NGO ‘Helping Hand Pwani’ came to donate foodstuff for the widow and found her living in a pathetic state forcing them to launch a social media campaign to transform her life by offering her proper shelter.

Today, Ms Sharif who has never known happiness for the last 15 years since the death of her husband can afford a smile and shed tears of joy in disbelief.

To her life was just okay living in the ‘Near collapsing’ structure covered by old iron sheets and nylon with a very tiny entrance that had no door.

Inside the ‘house’ were three stoned Jiko, one bed which she shared with her son, and four grandchildren. It was fine with them as there was no hope for the better.

Interestingly she is surrounded by a neighbourhood that is living in proper houses but for her, even a toilet was a nightmare.

At night they used to dig a hole with a jembe to relief themselves and in case a call of nature came during the day they had to borrow a toilet from a neighbour.

“Today I am very happy, very happy as you can see people have come here, they built for me a new house family have come to celebrate with me that is happiness,” he said.

When reporters arrived at the widow’s home there were over 20 cars packed which belonged to members of the NGO who had come with their families including men, women, girls, boys, young and old.

They were participating in different activities including painting the new house, carrying blocks for the construction of toilet and cooking the famous Coast cuisine of Pilau.

The excited Ms Sharif could be seen walking around in disbelief probably wondering how a poor woman who had lost hope could have such hear warming guests who had soared their entire day and drover all the way from Mombasa and Kilifi to be with her.

Then came the moment of breaking the old house. The Helping Hand Pwani members carefully brought it down and ensured all the utensils of the widow were safe.

As they removed utensils Ms Sharif brought out a spear and disclosed that it was a security weapon that is poisonous and that which she used to protect her grandchildren at night.

To get daily bread she said that she had to chip coral stones and sell to get money as her son was jobless and it was her duty to ensure they all get food every day despite the challenges.

“My life turned hostile when my husband died and the burden of taking care for my children was entirely rested on me. Since then things have been frosty with the future always bleak. My young children had not known any means of survival and that proved even more challenging to me,” she said.

“There is a woman called Fatuma who after seeing my plight when they came to give out food to widows, decided to take my plight in fully force for assistance.

Helping Hand Pwani official Mr Habib Hakim said the group was formed to help feed orphans in Mombasa where they are affiliated with more than 25 orphanages with most of their targets being widows.

“As we were supplying food to orphans, we were informed that there is a woman in Muyeye who was very poor and had no food. When we arrived here, we were touched by her situation and decided to lend a hand,” he said.

As a group, he said they unanimously agreed to construct a better house for the widow and to raise funds, he said they turned to social media including Facebook and whatssup group that has members from all over Kenya and abroad.

“We usually contribute amongst ourselves and then do a quotation for the house and begin construction immediately, what is important is that we build eco-homes,” he said.

Mr Hakim said they use mud and then plaster it with cement before painting it with the colors of their choice.

The building work is done by local youth.

For the house, to last longer, they have an agency called Vector com pest control who will spray the house.

Hakim said the construction of the house cost them Sh140,000 while the toilet and septic tank cost them an extra Sh60,000.

“We are very that she can afford a smile today. When we first came she lived a troubled life and could not smile. It’s a new era for her,” he added.

The organization also brought her beds, mattresses cooking utensils and curtains for the house.

He said those wishing to follow them on Facebook should go to Helping Hand Pwani adding that they have a huge following of Kenyans in Britain, Germany, the USA who are helping them.

“We bought her a storage tank and set a system to harvest water, if it rains, she will be able to get 1500 litres of water,” he said.

He said they will install a solar system for the woman as they follow up on how she can get electricity.

Mahmoud Mohamed Ali a Kenyan based in the UK for the last 30 years said he travelled to Kenya to witness the handing over of the house to the poor widow.

Mr Ali who is a member of the NGO and a volunteer said he was happy to be able to put a smile on the needy’s faces.

“What attracted me to Helping hand Pwani is the support they give to orphans, elderly, widows, so many sick and needy kids, that’s what I volunteered for,” he said.

He said he once came and saw a small child eating while smiling something which cannot be shared on Facebook.

He said everywhere they go they get a different experience from the sick, widows, mosques, madrassa which is memorable.

“For the girls, we have hampers where we give sanitary pads, underwear’s shaving kits soap, detergent to wash the underwear, toothpaste, and toothbrush,” she said.

For the boys, she said they also do give them two pairs of inner wears, two shaving kits one for external and one for the inside together with toothpaste, toothbrush, soap, and detergents to wash their innerwear.

“We are looking at raising responsible and groomed individuals who can look after society. At the same time, we don’t focus on villages that have underprivileged kids we also go out to schools because it’s very important to teach hygiene to everyone,” she said.

For the widow, Bandali said she was very happy to be part of the team that had put a smile on her face and enabled her to have a place to call home.

“As a human being am in love with the idea that we broke a shelter and we provided a home, she no longer is going to live in just a house to cover herself but she has a home that she can call her own,” she said.

Ms Maimuna Faruk a member from Kilifi said she is proud to be part of helping hand Pwani because of what they do to support people.

Ms Faruk, a cook by profession said she is the one who cooked the food for the 150 children and is happy to offer help always.

“Leaders should be in the frontline to support the people who are suffering in many areas due to the high poverty levels,” she said.

It was a smile for the widow who after living in life miseries, finally she has a decent home, thanks to the power of social media.