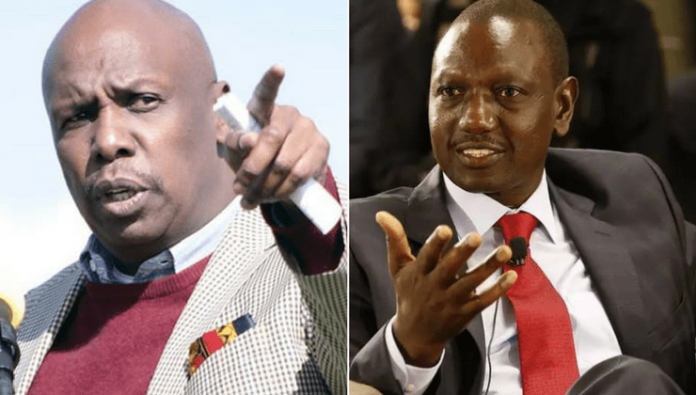 BY FAITH MUTETE – The political cold war between Deputy President William Ruto and Baringo Senator Gideon Moi played out in the open during the burial of Jonathan Moi at Kabimoi.
The fight appears to have roped in retired President Moi whose handlers ensured that there was no eye contact between the DP and the retired President

Why then is the animosity?
Let’s start with the known facts. It so happens that then President Moi lured Ruto into politics vide the money machine of YK 92. Ruto them had just cleared his BSC degree in Botany at University of Nairobi in 1990.
And once he joined in, there was no turning back. He elbowed his way into the core of KANU and become one of the most strategic loyalists in the ruling party.
Once in, he took on the high and mighty and reportedly punched Moi’s nephew at State House. This was during his time as an Assistant Minister in the Office of the President then headed by Marsden Madoka.
The hustler star was kiting high. And Moi never seemed to fear that Ruto could be a threat to his grip on Kalenjin politics.

In fact, when Moi was sorting out the likes of George Sairoti and Joseph Kamotho from KANU and national leadership in 2002, Ruto and then blue eyed boy Julius Sunkuli played a critical role. Ruto emerged as the undisputed Organizing Secretary as Kalonzo Musyoka, Uhuru Kenyatta Katana Ngala and Musalia Mudavadi become regional Vice Chairman of KANU on 17th March 2002.
Then came the Moi retirement and Ruto saw a political gap which he quickly filled in 2005. It so happens that President Mwai Kibaki decided to appoint Kroll and Associates to investigate the depth of corruption under Moi. Most of the people targeted were former Moi associates such as Joshua Kullei, Samuel Gichuru, Hosea Kiplagat among others.
Some of these embarrassed Ruto in the hope that he would protect their interests.

During the 2007 election, the chicken came home to roost. All Moi’s sons, including Gideon were vanquished by Rutos hedgemen.
There was panic in Rift Valley over these developments. A seed of political discord had been planted.
During the Moi transition in 2002, the unwritten agreement was that Gideon would play a critical role in the Uhuru administration. This never happened. Could this be the role Gideon is eying in 2022? Time will tell.