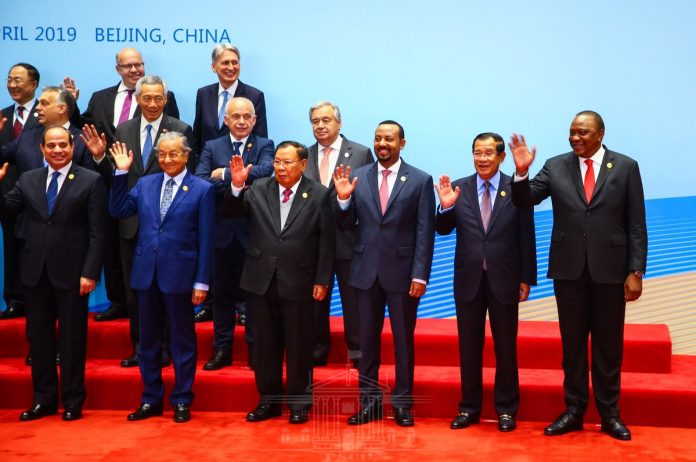 As you are no doubt aware, H.E the President is winding up a very successful visit to the People’s Republic Of China.

The visit to China by H.E The President and his delegation on the invitation of the Government Of the People’s Republic of China was to attend the Belt and Road Initiative which is a multilateral event that brings together over 60 Heads of State and Government and other leaders from across the world to discuss issues of inter-continental connectivity for global trade.

The President participated at both the Summit and the High Level Heads of State Meetings. His contribution urged the participating countries to strengthen connectivity, open up markets, commit to rule based international trade, strengthen multilateral cooperation and ensure that development pursued is people centered, is sustainable and ensures shared prosperity.

President Kenyatta and his delegation comprising several Cabinet Secretaries and other senior Government officials also had a bilateral meeting with their Chinese counterparts, led by H.E President Xi Jinping . The agenda of the bilateral meeting which was extremely successful covered the following areas:

i) The signing of a trade agreement for the export of frozen avocados from Kenya to China which followed the signing of an MoU on Sanitary and Phytosanitary Standards late last year for the export to China from Kenya of various horticultural products. The trade agreement on avocado which is a huge boost to our farmers marks the beginning of a new chapter in our relations with China that aims to address the trade imbalance and promote mutual economic benefit.

ii) The second item on the agenda was the signing of a Framework Agreement between the Kenya National Highways Authority and the China Road and Bridge Cooperation for the construction of Kenya’s first expressway from Jomo Kenyatta International Airport to Westlands. This landmark project aimed at decongesting Nairobi City is privately funded through the Public Private Partnerships legal framework.

iii) The third item was the signing of a financing agreement valued at KShs. 17Billion between the Government Of Kenya and China EXIM Bank for the construction of the Konza Technopolis Data Center and IT infrastructure.

Construction of basic infrastructure at the Konza Technopolis is in the final stages of completion and this IT project will enable the special zone to be operational by 2020. This is a huge milestone for the project conceived over 10 years ago and will be a significant source of jobs in the technology sphere.

It is therefore very disappointing to read excerpts from a number of newspapers, namely the Saturday Nation and the Saturday Standard. Both papers intimating that the Republic of Kenya as represented by H.E President Uhuru Kenyatta has “failed to secure loans or funds” for the extension of the Standard Gauge Railway from Naivasha to Kisumu.

It is important to note that the question of funding for the extension of the Standard Guage Railway from Naivasha to Kisumu was not on the agenda of the meeting between the two President’s. It therefore follows that the President cannot be said to be returning home empty handed for something he did not request.

It further goes without saying that these headlines are are not only factually incorrect, they are misleading and extremely damaging to the reputation of the People and the Government of the Republic of Kenya.

Whilst making it clear that the Government of Kenya did not discuss any funding proposals for the extension of the SGR at this meeting, it is very critical to state at this point that the SGR project is a regional project and the complexities in negotiating its completion involve several countries and securing financing for its completion could take several years of intricate negotiations.

However, given the public interest in the matter it is important to acknowledge that the SGR Phase 2A of the Railway from Nairobi to Naivasha will be complete by August 2019.

In this context, President Kenyatta highlighted to his counterpart the plans of the Government of Kenya to break ground on the Industrial Park and Dry Port to be constructed at the Naivasha Special Economic Zone by June 2019.

The President extended a welcome to Chinese companies interested in establishing industries in Kenya’s Special Economic Zones to come and visit the site.

It was further appreciated that once the Industrial Park and Dry Port serving our regional neighbours Uganda, The Democratic Republic of Congo, Rwanda and South Sudan come into operation, it will be necessary to ensure that there will be no disruption in the movement of cargo from Naivasha to the region whilst financial aspect for the extension of the SGR is concluded.

To mitigate any risk of disruption to the movement of cargo, the Government Of Kenya shared its short term plans to rehabilitate the existing meter gauge railway to the Port of Kisumu to ensure seamless interconnection with the SGR at the Naivasha facilities.

The SGR remains an essential project of Kenya’s Vision 2030 strategy and a key enabler of regional economic growth within East and Central Africa. As a Pan-Africanist,  President Kenyatta remains committed to laying the necessary foundation for the trans-African rail and road infrastructure that will transform intra-African Connectivity and Trade for the economic be